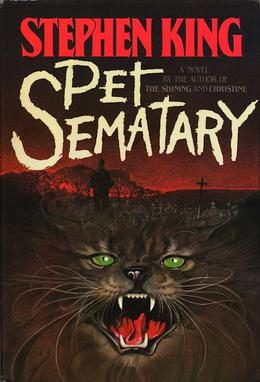 I Don’t Want to be Buried in a Pet Sematary

We all know that line.  Pet Sematary is one of Stephen King’s books that really scared me.  I’m not going to recap the story because we’ve all probably read it, or at least seen the movie.  The setting was actually based on parts of King’s life.  Moving to teach at a school, living on a truck route, worrying  about their son running into the road, and their daughter’s cat getting run over.  But the similarities end there.  Thankfully none of that happened in real life. The original movie is pretty true to the book, but the book is much scarier!  Rumor has it that King even scared himself with this one.  And I imagine that’s pretty hard to do.

If you ask anyone who’s read the book and then watched the movie, they’ll tell you that the book was better. (which is usually the case) This one is no different.  The movie does a good job of getting everyone’s personality across, but the book gets you so much deeper!  His wife is still dealing with things from her childhood, and Louis is trying to deal with the death of a student and the ominous dreams he’s been having since.  And then the family cat gets run over, and then their son.  It’s a lot.  Especially when you have a cursed pet sematary in your backyard.

We never really get an explanation as to why the pet sematary gets a hold on people, or why things come out of there wrong.  All we know is that it was an ancient Indian burial ground,  Was it cursed to begin with?  Is it a punishment for disturbing it? We’ll never know.  Then there’s the walk to the sematary.  Fog, weird noises, a Wendigo.  Maybe that’s why it stuck with me. If you like to read, that scene will really draw you in.  Your mind makes the picture instead of a movie, which in my weird brain, can sometimes be so much scarier!

King is an expert at getting you into the character’s head.  I really felt their pain after their son died, even though I was only in my teens when I read it.  Of course by the time he dies, you know where the story is going.  But what happens after is….something else.  Nothing happens fast in the book. But I read it all in a couple of days.  It makes you think.  It gets under your skin.  And into your head.

I still remember reading about Louis and Jud going to the Pet Sematary. The imagery King used, together with Louis’s thoughts, really put me there.  His thoughts at the cemetery, and while he’s taking Gage to the pet sematary are what I remember most when I think about the book. Reading it was kind of like looking at a car accident.  I wanted to stop, but I just kept going.  Then it makes you think: Jud has already told him about his childhood dog, and the person that was buried there years ago.  Louis knows all too well how Church came back.  So why the hell is he doing it again??  Is there some evil force in the sematary making him do it?  Or has he just lost his mind?

I hadn’t read a lot of horror at that point, and this was doing a number on me.  When you’re a kid, the idea of dying is scary.  As an adult, the thought of losing a child dying is terrifying.  (And as an adult who knows someone that lost a child, I’ve seen firsthand the absolute soul crushing pain it causes).  But I think it was Louis’s slow descent into madness that really got me.  King threw in all the supernatural terror his genius writer’s brain has to offer, of course, but it wasn’t in your face.  It was always there in the background.  Just biding its time.  Kind of like the pet sematary.

If you could bring someone you loved back from the dead, would you? And if they came back wrong?  Evil?  Would you be able to live with the consequences, or would you be able to do what was necessary to fix it?  If you’ve read it already, read it again! If you haven’t, read it and then think about it for a minute…..Is dead really better?