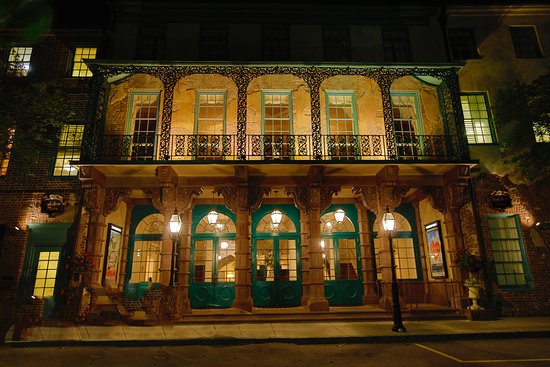 The southern United States has a very rich history. And thanks to the Revolutionary and Civil Wars, it has quite a haunted history as well. It seems like everywhere you go there’s an old battleground or a building that has a ghost that’s tied to back then. Charleston, South Carolina is no exception.  And The Dock Street Theatre in the French Quarter of Charleston is no exception. Here’s a quick history:

It was built in 1736. The original building was one of the most beautiful in the town at the time and became popular very quickly. In 1740, there was a fire in the French Quarter and the Hotel was badly damaged. In 1809 the building was rebuilt and the theatre became the Planter’s Hotel. It was an extravagant hotel and drew many famous people there. One of them was a famous actor at the time, Junius Booth, the father of John Wilkes Booth.

After the Civil War, the South had economic problems and the hotel was abandoned and put up for sale. It sat empty for almost 50 years, until The City of Charleston bought it, restored it, and renamed it The Dock Street Theatre.  However, some people from the past refuse to leave. There are two famous ghosts said to be haunting the theatre.

The ghost of a woman is seen frequently throughout the theatre. People believe that it’s the ghost of Nettie Dickerson. Nettie was a prostitute at the Planter’s Hotel. The story says that she was a beautiful woman that came to Charleston from the country but fell in hard times. She didn’t make enough money to live on, so she became a prostitute at the hotel. She was apparently not thrilled with her chosen profession. When she would see one of her customers at church with his wife, she would go over and tell the wife about it. Needless to say, men stopped going to her, and she ran out of money. The story of her death is a little unclear.  One version says she was struck by lightning while standing on the hotel balcony during a thunderstorm. Another has her leaning over and letting herself fall. Either way, Nettie’s ghost is still there.

The other ghost is supposed to be the ghost of actor Junius Booth, the father of John Wilkes Booth. Booth was very famous at the time. He stayed at the hotel often and also performed there. He is supposed to have tried to kill his manager during a fight at the hotel. Although Booth died somewhere else, people say he still comes back to haunt the hotel. Rumor has it that hotel guests have felt him breathing on their necks or touching their necks.

So if you ever go to The Dock Street Theatre, be on the lookout. You might see something besides a show!