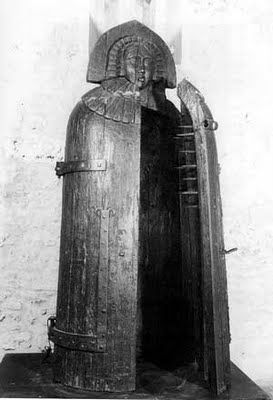 The more I write about torture methods, the happier I am that I wasn’t alive when they were used. Today’s device is the Iron Maiden a/k/a the Nuremberg Virgin.  The most famous version of it was built in Nuremberg, Germany, hence the name. Although I’ve almost always seen it referred to as the Iron Maiden. The Nuremberg one was destroyed in a bombing in 1945.

People think Iron Maiden was invented in the Middle Ages, but no one knows for sure. It was used a lot during the Spanish Inquisition. (If you’ve seen Mel Brooks History of the World, you will know the song that’s been stuck in my head all morning!) There are stories of it being used as far back as 200 B.C. in Sparta, but nothing that’s been proven. Supposedly King Nabis had one made that looked like his wife because she had helped him collect some debts. His version is said to have needles covering the inside of the chest and arms.

The Iron Maiden looks like a coffin shaped like a person, and it has the head of the Virgin Mary on top. It opens at the front and is lined with spikes. The spikes are long enough to go into someone’s body, but not enough to kill them. The person is put inside it and the door is locked closed. The spikes were positioned so that they went into the arms, legs, face, buttocks, and shoulders. The door would be opened and closed a few times, in order to create fresh wounds. In between that, the victim was trapped inside the dak, metal container, wondering when it would be opened and closed again.

Think about it: You’re locked in a box with a bunch of dirty metal spikes stuck in your body. It’s complete darkness. You can’t get the spikes out, and if you move even a little bit, it makes your wounds worse. After who knows how long, the doors are opened, the spikes come out (painfully) and you think it’s over. Nope. The doors are closed and it starts all over. The process is repeated until you finally die.

One more horrible thing…supposedly in 2003, an Iron Maiden was found at the Iraqi National Olympic Committee compound in Baghdad. The head of the company was Saddam Hussein’s son Uday. The rumor was that the Iron Maiden belonged to him and that he used it to punish athletes that didn’t perform well.