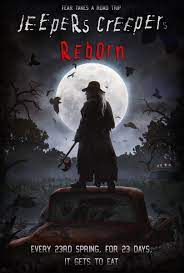 Love it or hate it, Jeepers Creepers has become a cult classic.  I must admit that the first time I watched it I thought it was lame as hell, but it grew on me and I must say that I now enjoy it very much.  The largely unexplained demon (you can find an unofficial origin story here) has been around since humans could walk upright. It has a fondness for human organs and 50s pop music and is back for a fourth installment of the series. The monster that feeds for 23 days every 23rd spring has gotten new life through director Timo Vuorensola. He is fairly unknown to anyone other than die-hard movie fans. So if you aren’t familiar with him, check out the gem that is Iron Sky from 2012 (which among others has Udo Kier in the cast). It is an absolutely outrageously stupid story about a Nazi moon base, where they hide and plot a return to world domination. So clearly Timo is a man that likes to take chances. The fourth installment of the series will be a continuation of the second one since number 3 took place before the events of the first one. So a rewatch of number 2 before watching number 4 could be a good idea.

It’s gonna be interesting to see how this is gonna play out since Timo is fairly new. The creator/director of the first 3 movies, Victor Salva, is not in any way involved in this project. For those that don’t know, Salva was convicted of molesting children in the 1980s. Since #metoo and other campaigns highlighted the sexual perversion of more than one director, his name has been buried and he will never work in Hollywood again.  (Let’s just hope Bryan Singer is next). Timo has stated publicly in a tweet that Victor Salva would not be involved or benefit from the production of Jeepers Creepers: Reborn.

I’m very excited and hope this movie will be just as ridiculous and over the top as the first three. But you should watch the trailer and judge for yourself. https://www.youtube.com/watch?v=6D0yFgZnmYM