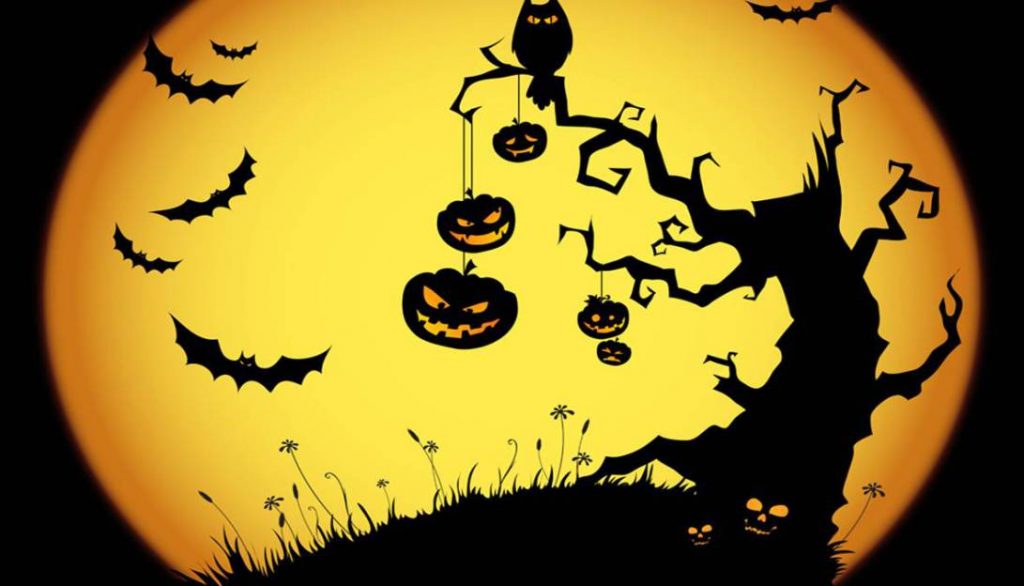 Let’s face it my spooky friends, Halloween has come a long way from the pagan traditions of the old days.  Now don’t get me wrong, I’m all for traditions.  Get off those pagan butts and meet me under the Samhain full moon at midnight!  Speaking of Samhain, that is the day where most of the things that we associate with Halloween originated. That being said, the evil demon in me is all about the scary traditions of today’s Halloween!  Everything we associate with Halloween was brought here over the years by European immigrants and evolved into the symbols we have today.

The Jack-o-lantern:  According to Irish legend, a blacksmith called Stingy Jack invited the devil to join him for a drink. Stingy Jack didn’t want to pay for the drinks, so he  talked the devil into turning himself into a coin that he could pay the bill with. The devil did,  but Jack left without paying the bill. He put the coin in his pocket with a silver cross, and the devil  was trapped. Jack  made a deal with him: He would let the devil out and the devil promised not to get revenge, or take Jack’s soul when he died.  Then he tricked the devil a second time. He got the devil to climb a tree for some fruit, carved a cross in the tree, and trapped him up there until he made the same deal.

When Jack died, he couldn’t get into Heaven, and the devil didn’t take him to hell, so he was stuck in between. The devil gave him a piece of burning coal and told Jack to “find his own hell.” Jack put the coal into a carved-out turnip and has supposedly been roaming the earth with it ever since. In Ireland,  people would see lights moving by in the swamps and said  it was Jack wandering the countryside.  They started calling him “Jack of the Lantern,” or “Jack O’Lantern.” When the Irish immigrants came to America, they brought their legends too. The British used to carve jack-o-lanterns out of things like turnips or squash to celebrate fall. Pumpkins were easy to get in America. Or maybe it was just more fun to dig their guts out!!

Costumes:  Wearing costumes originated from the Celtic tradition of wearing animal skins to hide from mischievous spirits on Samhain. When the Christians took over, they combined Samhain and All Hallows Eve to create Halloween. Some Samhain traditions, including wearing costumes, stayed. In medieval England and Ireland, the animal skins were replaced by costumes that symbolized the souls of the dead.  By the 15th century, people started dressing as winter spirits and demons, and the costumes started getting spooky.

Ghosts:  Samhain is the day that the veil between the world of the living and the otherworld thins, and the spirits are able to move between the two.  The connection between October 31 and ghosts was strengthened after the Christians combined Samhain and All Souls Day.   In America, Halloween became more of a fun holiday instead of a religious one. As time passed, ghost stories and hauntings became more popular, and the spirits of our ancestors were replaced by the ghosts and demons found in horror movies.

Black Cats:  My favorite of all the cats!   In the old days, witches (and by witches I mean wise women, healers, and followers of the Old Ways) were often found to have cats, especially black ones.  People assumed that these cats helped the witches perform their “evil” magic.  The association of the evil witch and her black cat familiar was born and has remained ever since.  (However, I personally know witches whose familiars aren’t black.  A familiar can be any animal actually, FYI).

Bats: The sacred bonfires of Samhain naturally attracted bugs, and the bugs attracted bats. Throughout history, many countries have associated bats with bad luck and death, possibly due to the legend of vampires. We all know the story! Turning into bats, flying around at night, and either drinking your blood and either killing you or making you one of their own. There was a time when people truly believed in vampires. As with everything else, time, horror movies, and legend turned them into Halloween symbols.

Halloween colors: The origin of decorating with black and orange  is simple. The Celts associated the color black with summer’s “death” and orange with the harvest.

Americans liked the traditions and legends of Halloween and started celebrating it too. They started wearing costumes, throwing parties, and incorporating the legends and traditions brought over from Europe.  Pop culture slowly began influencing Halloween costumes. Movies, tv, games, people, food – there are no limits. Fast forward to today and all bets are off. And we all love every second of it!

Did I miss something?  Did I leave out your favorite part of Halloween?  If I did, email me at scarymatter@gmail.com and let me know!