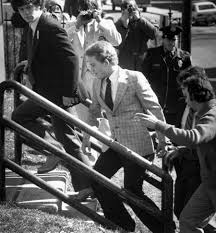 Arne Johnson – The Devil Made Me Do It

In 1981, the town of Brookfield, Connecticut, went through two huge historic moments. The first occurred in February when the town recorded its first ever murder. The second happened nine months later in November, when the defense of not guilty due to demonic possession was used during a trial for the first time.

Arne Johnson was nineteen years-old in 1981, working as a tree arborist. He and his fiancee, Debbie Glatzel, moved into an apartment building after Debbie had taken a new job as a dog groomer for a man named Alan Bono. Alan also happened to be the landlord of the building. On February 16, Arne took the day off from work and decided to spend the day with Debbie and a few of their family members at the kennel she worked at. Alan Bono joined them for lunch and after began drinking. At this point, he became incredibly agitated and violent. After Alan had grabbed Debbie’s young cousin during his intoxicated rampage, Arne pulled a knife out and stabbed Alan four to five times. Alan died in the hospital. Arne was later arrested for the murder, the first ever murder in Brookfield, CT.

Although the murder of Alan Bono is the main part of this incident, the story didn’t quite begin here. In the eyes of Ed and Lorraine Warren, who had reached out to the Brookfield police department after Arne’s arrest, this had something to do with an incident involving Debbie’s younger brother, David, several months prior.

Before Arne and Debbie moved into Bono’s apartment building, they had rented out a different property. David, who was only 11 years-old at the time, helped them clean up the property before they moved in. It was then that David first encountered an old man on the property who scared him. According to David, the old man said that he would harm the family if they moved onto the property. David was traumatized by this man and began having terrifying visions about demons. The visions got worse and David was even experiencing physical harm from these forces. So, they called in Ed and Lorraine Warren to help David. They believed he was possessed by these demonic forces and performed several exorcisms on him. During the exorcisms, Arne encountered the demon. After them, he began displaying similar behaviors that David had when he was possessed. Arne was still behaving like this when Debbie was hired by Alan Bono and they moved into his apartment building.

When Lorraine Warren called the police department after Arne’s arrest, she told them that he was possessed when he murdered Alan Bono. The defense for Arne even went as far as to submit a not guilty plea based on the Warrens’ insistence that Arne was possessed. When his case was taken to trial, the judge refused to accept that plea and the defense later entered a plea of not guilty due to self-defense. On November 24, they sentenced Arne to 10-20 years in prison, of which he wound up serving only five.

Next year, The Conjuring: The Devil Made Me Do It is being released. This third Conjuring film is going to explore this case.

What do you think? Was Arne Johnson actually possessed or was it simply just self-defense? If you want to learn more about this case, check out the link below and catch The Conjuring 3 when it comes out next year. Also, check out the Discovery Channel’s A Haunting episode where Arne and Debbie tell the story themselves.

1 thought on “Arne Johnson – The Devil Made Me Do It”