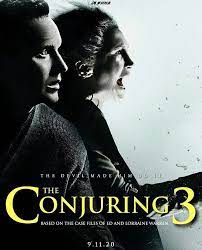 The Conjuring 3: The Devil Made Me Do It

Back in October, I wrote this article about the Arne Johnson murder case that was recently brought to the big screen in The Conjuring: The Devil Made Me Do It. After watching the movie, I want to talk about how the movie compares to the real-life case.

If you haven’t read my article and aren’t familiar with how the case went down in real life, I’ll give you a brief rundown. In 1981, a man named Arne Johnson murdered his landlord, Alan Bono, by stabbing him multiple times. When he was arrested for the crime, Ed and Lorraine Warren revealed that his fiancee’s younger brother, David, had previously been possessed and they exorcised him. They believed that Arne was possessed by the same demon that had left David’s body. Arne’s defense team used this to plead the defense that Arne was innocent because he was possessed and therefore didn’t know what he was doing. However, he was convicted of the murder anyway and was sent to prison for five years.

The Conjuring: The Devil Made Me Do It is the third film in the Conjuring series. Like the other films, it is a fictionalized adaptation of a real-life case that was investigated by Ed and Lorraine Warren. In fact, most of the film is actually fictionalized. They show the murder of the landlord (renamed Bruno), Arne’s arrest, and some of the trial. The facts of the case are all present, but the rest of it never happened. There was no satanic group involved, no evidence of Arne being possessed in prison, and no tie-in with an unsolved murder-suicide committed by the same demon. This was made up by the creators of the film to turn it into something an audience would enjoy watching. After all, most people wouldn’t pay to watch a shorter movie about a random trial and not see any scary exorcisms or demons. People want to see those aspects in a horror movie.

But to me, what I want to know is if this movie can really be considered a horror movie. Don’t get me wrong, I liked the movie. I know these types of movies aren’t genuinely scary and most of them are made up. But there was something about this movie that didn’t really scream horror to me. I’d describe it more as a mystery and honestly, somewhat of a romance movie. Most of the movie followed the Warrens around as they tried to not only prove that Arne was possessed, but to try and destroy the demon before it can possess anyone else. They talk to experts of satanic worship and put clues together to eventually find the source of the demon. Alongside that, the relationship between Ed and Lorraine is really emphasized in this movie. When they’re not hunting down the demon, they are caring for each other. Ed suffers a heart attack during the exorcism and Lorraine spends a lot of time trying to get him to take it easy and take his meds. Ed spends a lot of time not listening to his wife by trying to help her cope with the intense visions she sees. And honestly, if you took a shot every time they called each other’s names, you’d be dead by the end.

While I enjoyed the movie, I felt it was lacking in the horror department. Yes, they had a few classic James Wan minor jump scares and a creepy demon, but that was about it in terms of “horror.” The exorcism in the beginning really set a high bar of spookiness that the rest of the film failed to live up to that in my eyes. I think honestly the Satanic storyline was a miss as well. What I like in the other movies is that there’s this demon plaguing a family and their home. There’s usually not much of an explanation or investigation as to where this demon came from and why it’s there, but its presence is strong and practically destroys the family. I think too much time was spent trying to find the source of the demon rather than seeing its effect on the family and trying to defeat it.

But overall, while it missed a certain mark for me and was heavily fictionalized, it was still a really good film. I was interested in the movie and the storyline. I think the first Conjuring movie is by far my favorite, but this one was still a good addition to the universe and I can’t wait to see which Warrens case they cover next.

If you’ve seen it, what do you think? Tell us on Instagram @scarymatter if you enjoyed the movie and if you think it’s a horror movie.