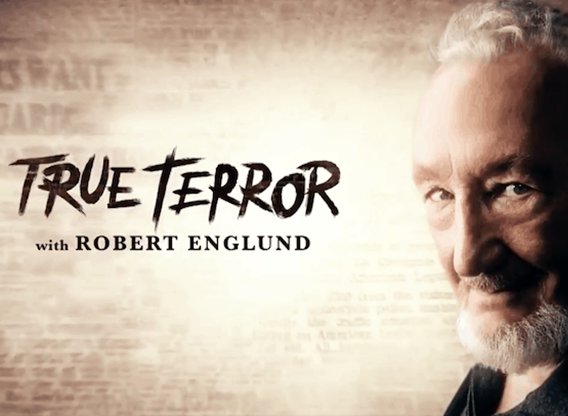 If you ever dreamed of having Robert Englund tell you a horror story, your dream has finally come true! He’s as obsessed with horror stories as the rest of us. Robert has scoured news stories dating back to the 1880s. They come from actual newspapers and are supposed to be true.  Each episode tells three stories, with Englund occasionally popping in for a creepy voice-over (with just a hint of Freddy Kreuger in his voice). The result is True Terror with Robert Englund.

Englund says…“I’m calling it a dark docudrama… What I like about it is, even though it’s myths and legends, they all were reported in a newspaper. They have a certain journalistic reportage cred that I think differentiates it from a show about UFOs or paranormal (activity).  We have our share of ghost stories, but these are ghost stories that were reported in newspapers and periodicals. So, even though perhaps we’ve outgrown some of those superstitions and we can explain some of those things better now in the 21st century, I still like the idea that these were stories that came from newspapers and I love the fact that they are part of our history. And then there are the ones that are obviously true, like people being buried alive during the yellow fever epidemic.”

It’s kind of a mix of Unsolved Mysteries, American history, and one of those “true story” horror reenactment shows, only better. The acting is better and the episodes were filmed at real locations. On top of Englund’s narration, there are paranormal investigators, authors, and historians providing extra information mid-story. They even throw in experts from various other fields, depending on the story,  We get demons, prophecies, ghosts, monsters, and people that are just plain evil. They also use the actual newspaper articles that they got the stories from.

True Terror doesn’t take itself too seriously. Robert Englund is being a little extra Robert Englund and is having a great time doing it. The special effects are a little cheesy, but I get the feeling that it’s on purpose. The stories are supposed to be real, but considering the periods they come from, they are easy to explain away. I think this gave the actors a little leeway to overact a bit, and I loved it!

This is not a scary show. The scariest part of it is Robert Englund! It’s probably not something most people would watch if his name wasn’t in the title. There have been other shows that are pretty much the same. I’ve seen some of them and rolled my eyes through each one. This one I had fun watching, Englund was definitely part of the reason! He walks around a spooky set looking like a creepy college professor holding back his inner Crypt Keeper.

The stories are ridiculous by today’s standards. Some of them I’ve seen before. Most of them wouldn’t even be published anywhere besides a supermarket tabloid nowadays. But back in the day people believed every word of it. So if you like a good cheesy reenactment show, you should watch this. It’s a good mental floss! Oh, and did I mention Teddy Roosevelt and Bigfoot are in the same story?