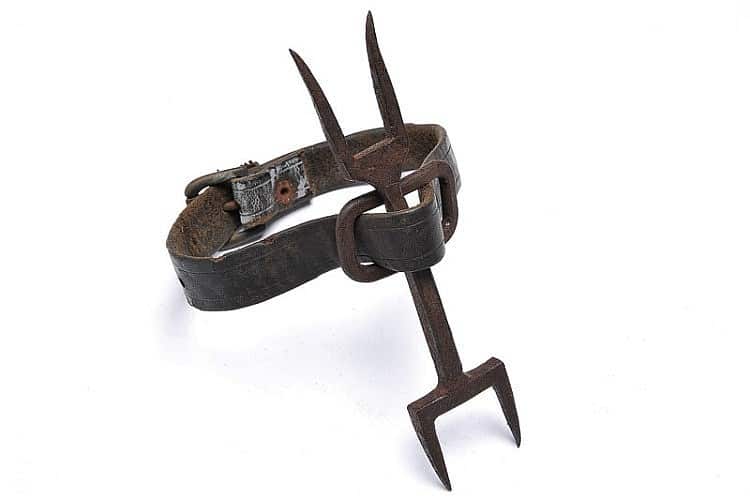 You screwed up, my friend. What were you thinking? Someone heard you speaking blasphemously against the church. And you over there…the one with the herbs hanging in the window. And you…are those freckles on your face? Is that red hair sticking you’re trying to hide? Nice try my friends, but not good enough!

It’s the Spanish Inquisition and they’ve got you. Nothing’s going to save you now. You can proclaim your innocence all you want. They’re having none of it. Now you have to pay the price. The only thing worse than being a witch is speaking against the church. The Inquisitors take their religion very seriously. The only question now is – what are they going to do to you? Lucky for you, the guy in charge today has a hangover and just isn’t feeling it. So it’s the Heretic’s Fork for you!

The Heretic’s Fork is a metal collar or strap with a two-ended fork attached to it. That doesn’t look too bad. Compared to the other devices at their disposal, you may be breathing a sigh of relief. I wouldn’t relax just yet if I were you. One end goes into your sternum and the other goes under your chin. Written on the fork is the Latin phrase “Ego Renunito” (“I renounce”)

Once the collar is fastened, you’re stuck. The farther down you let your head fall, the deeper the prongs are pushed into you. The pain from that is probably enough to make you confess, but if you try to talk…that’s gonna hurt too! I forgot to mention that your hands are tied behind your back, so holding your head in a good position is out. I know you’re tempted to hold your head as far back as possible, but that’s not going to work either! The fork was designed to go in deeper if you try that too. And as with a lot of other devices, it’s not designed to kill you.

As with all torture devices, the Fork wasn’t designed to kill quickly. And if the pain of it wasn’t enough, you can’t fall asleep either. If you fall asleep and your head starts to lower, the Fork goes in deeper. I hope you’re not hungry! You can’t eat either.

At long last, your captors finally take the device off of you. Ready to confess? Of course you are! Give it your best shot. Then off you go to the auto-da-fe. This is a long day of prayer and sermons. After which your sentence is read. Sadly whether or not you confessed, you’re most likely going to be burned at the stake.