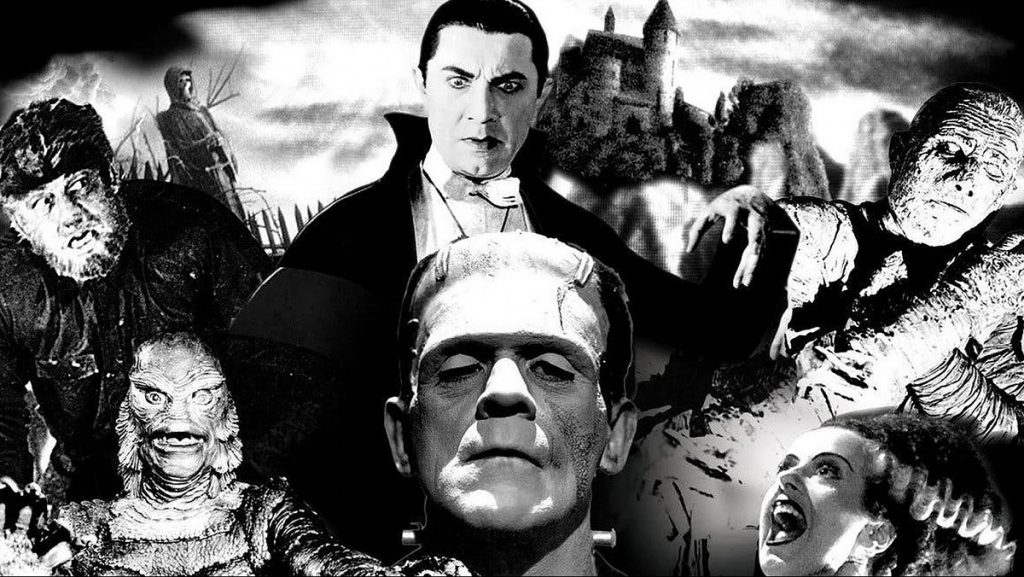 Halloween week wouldn’t be complete without mentioning the Universal Monsters! Where would horror movies be without them? They are the ancestors of the horror movie monsters. The monsters, slashers and demons that we have all fallen in love with over the decades have all been made possible because of them.

In 1923 Universal Studios released The Hunchback of Notre Dame, with Lon Chaney as the hunchback. It was technically a historical drama, not a horror movie. It was very dark, and Chaney was pretty creepy in the role, and the makeup made him look like a monster. It was such a success that Universal was inspired to see how a horror movie would go over with audiences. In 1925 they released The Phantom of the Opera (starring Chaney again), and the monster movies took off!

Then came the 1930s and the birth of all the monsters we love! I’m guessing that someone at Universal loved horror novels, and Dracula made his way to the big screen. Bela Lugosi was starring in the stage version of Dracula and was quickly cast in the movie. With his accent and his trademark hypnotic stare, the movie was a huge hit. It was something moviegoers had never seen. The sets were elaborate and dark, the music intentionally creepy, and who can forget Dracula’s half dressed concubines? He may never drink…wine, but people drank up the movie like a vampire draining someone’s blood. Then, nine months after Dracula, Frankenstein was born.

Universal had originally intended on having Lugosi as Frankenstein’s monster, but in the end, director James Whale decided to take the character in a different direction, and cast Boris Karloff instead. The movie kept the same formula of elaborate, creepy sets. But instead of a blood thirsty, evil creature, Frankenstein’s monster was confused  and scared. The monster’s feelings aside, the amazing make up that transformed Karoff into the monster, the way he moved, the sounds he made (and most likely the fact that he was dead at the beginning of the movie, successfully terrorized the audiences.

The Universal horror pantheon should be rounded out (in my humble opinion) with The Wolf Man and The Mummy.   In The Wolf Man Lon Chaney Jr. was brought into the dark worlds and creepy sets portraying the main character, Larry Talbot, the rich man that moves back to his hometown and ends up getting the werewolf curse.

Universal brought back Boris Karloff, as the unintentionally resurrected Imhotep,  for The Mummy.  To me The Mummy is almost more of a romance than a horror movie. After spending years pretending to be a present day man, he meets a woman that looks like his long lost love and wants to use her to bring the woman he loved to life. It was followed up by several sequels (with Lon Chaney Jr. replacing Karloff as the mummy): The Mummy’s Tomb (1942), The Mummy’s Ghost (1944), and The Mummy’s Curse (1944).

So if you’re a fan of the latest horror movies, but can’t decide how to spend Halloween this year, why not mix it up a little? Have a marathon of the oldies, but goodies.  Turn off the lights, light every candle you have, and spend the night in black and white. And don’t forget to watch Young Frankenstein!  It’s not from Universal, but it’s definitely a good one! (It’s also one of my favorites. I can recite it from beginning to end and I’m not ashamed!)