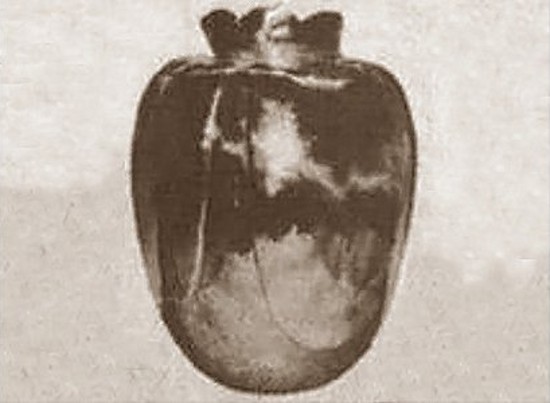 The curse of the Basano Vase supposedly goes back to 15th century Italy, although the legend is sketchy at best.  All “cursed object” legends have a reason for its curse, but not this one. No one knows where the legend originated, and the vase has disappeared. Other than the deaths of the owners, the story relating to the vase differs, depending on who’s telling it.

The vase was a wedding gift for a young woman that lived near Naples. On her wedding night she was found dying on the floor with the vase in her arms. (There’s nothing in the story about why someone would have wanted to kill her).  Legend has it that before she died she promised to return & seek revenge for her death. After she died, it was passed down through the family, and everyone that owned it died under mysterious circumstances. Eventually the vase disappeared, supposedly either hidden in a secret location, or  buried on sacred ground by a priest, no one knows.  Regardless of how it disappeared, it was found in 1988, supposedly with a piece of parchment paper inside it that said  “Beware…..This vase brings death”.

The message was ignored, of course, and the vase was sold at auction for four million Lira. The buyer was a pharmacist and died mysteriously three months later.  His family sold it to a surgeon who died two months after he bought it. Every person that bought the vase died almost immediately afterwards. An archaeologist bought it for his private collection and died three months later.  The next person that bought it died only one month later.

People started to believe that the curse might be real, and no one would buy the vase from the dead man’s family.  Supposedly, one of his family members threw the vase out of a window.  He was hoping that it would break and end the curse.  Not only didn’t it break, but it almost hit a policeman on the way down! The policeman picked up the vase to bring it back to the man and fine him for littering.  The family accepted the fine, but refused to take the vase back. Now here’s where the story gets a bit hard to believe.

They say that the police tried to find a museum to take the vase, but because of the “curse”, no museum would take it. Let’s be real…there isn’t a museum in the world that wouldn’t accept a 15th century vase, regardless of a rumored curse. (you know how many Egyptian artifacts are in museums, and we all know that stuff is supposed to be cursed!). There’s another version of the story that says that the policeman could sense the negative energy in the vase. In both versions, he decided to get rid of it.  It was supposedly put in a lead box and buried either in a cemetery, or some other unknown location.

There are some issues in the vase itself that make the backstory hard to buy. It isn’t the right style to have been from the 15th century; it’s too plain and the shape is wrong. The vase was made of silver, but most vases in Italy were made of porcelain at that time.  Plus, there appears to be only one picture of it in existence.

Then there’s the legend itself.  No one had ever heard of it until 1988. No one knows the name of anyone related to the story’s origin. Some people think the person that found the vase made it up to bump up the auction price. And whether or not there’s actually a curse, there’s no denying the people that died after buying it!

1 thought on “The Basano Vase”