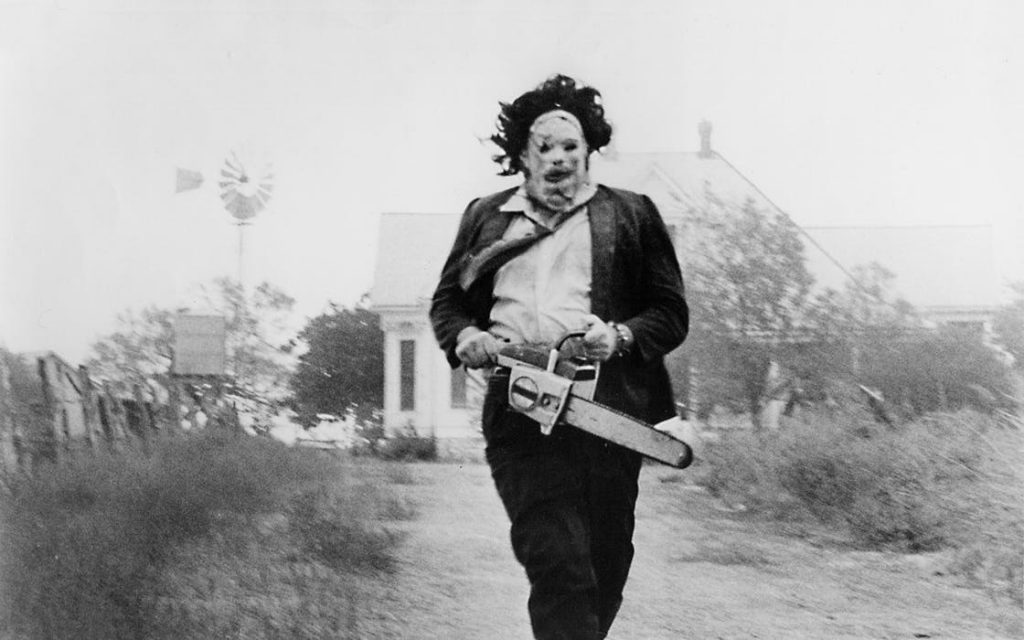 Ask any horror fan or read any list of the scariest movies, and chances are that Texas Chainsaw Massacre is at the top of just about all of them.  It really shook me when I first saw it!  It was released in 1974 and was masterfully directed by the late Tobe Hooper. Although the movie is said  to be a true story, that was just a marketing ploy.  The character of Leatherface is loosely based on Wisconsin murderer Ed Gein .  According to Hooper, he got the idea of the chainsaw while out shopping.  He was in a crowded hardware store right before Christmas, and apparently decided that using a chainsaw would be the best way to get through the crowd.  Sounds like effective Christmas shopping to me!!

The movie takes place in a small town in Texas (duh) during the dead of summer.  It centers around brother and sister Franklin and Sally.  While at their family’s farm with three of their friends, they discover there is a very disturbing family living next door.  It turns out that it’s the family of the insane hitchhiker that they had picked up on the way there.  Oh yeah, and they’re cannibals!  The kids end up being hunted by the hitchhiker’s brother, Leatherface (frighteningly played by the late Gunnar Hansen), wielding a chainsaw and wearing a mask made of human skin.

One of the things that amazes me most about it, is the lack of gore.  Don’t get me wrong, it’s not like there isn’t any blood, but when you think of someone being killed by a chainsaw you expect blood spurting everywhere, bodies being cut open or limbs getting cut off.  However, Tobe Hooper took it in an entirely different direction.  You know what Leatherface is doing, but instead of showing it all to you, Hooper makes you feel like you’re there.  No major special effects and no fancy soundtrack.  Just screaming kids and farm animals, a chainsaw, and your imagination. You only see a little.   And well done!!  You don’t always need blood, guts and gore to scare the crap out of your audience.

And then there’s Leatherface. Huge, quiet, wearing a mask and wielding a chainsaw.  Forget the chainsaw for a minute though.  To me there’s something deeply frightening with the idea of being chased by the silent masked killer.  There’s no rhyme or reason as to why they’re after you, just that they want to kill you and you have no idea why.  Or who they are.  To me that’s just terrifying!

It also amazes me that they did this in such horrible conditions!  I once read that it not only was the heat and humidity brutal, but they used real meat in the farmhouse and of course it rotted and smelled disgusting.  And imagine spending days wearing a huge leather face mask all day in the middle of the summer (and people complain about wearing one to the store!)   They didn’t have a huge budget either, so they had to wear the same clothes everyday.  Also, Tobe Hooper was supposedly a tough director to work for, and people hated him for a very long time.

It’s an extremely disturbing and intense movie.  Leatherface’s family is as messed up, psychotic, and freaky as any of your devious little minds can imagine.  The dinner scene is especially disturbing!  This movie is not for the faint of heart.  It really stuck with me.  It’s the kind of movie that you think about over and over.  The scenes that bothered you the most tend to  pop into your head when you least expect it, and you have to take a minute and shake them off.  The last half of the movie is non-stop action, you will barely have time to breathe!  If you’re a fan of the slasher genre, not easily freaked out, and think you can handle the intensity, it’s 100% worth watching!!!  This was the beginning of the slasher movie.  And if you’ve already seen it, watch it again and say hi to your old friend Leatherface.   He misses you!