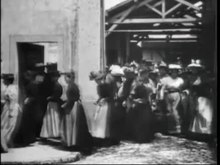 Have you ever seen the first horror movies?  Grainy, black and white, by today’s standard, not even the tiniest scare to be found!  However, if you think about the time period, and the fact that the motion picture itself was brand new and still kind of creeped people out, it’s no wonder they were so easily scared. Did you ever wonder where it all started?  I did.  So I scoured my beloved interweb and found all sorts of really great stuff.

In 1877, Thomas Edison invented the phonograph.  He decided that it needed a visual to go with it.  So he asked his lab assistant, William Dickson, to invent a motion picture camera.  Dickson based his invention on a combination of ‘series photography’ (a series of still pictures on a fast rotating plate to simulate movement), and the invention of celluloid film strips.  The result was the Kinetograph.  It was a motion picture camera that used stop and go film movement that turned pictures into movies.  Then they invented the Kinetoscope, a machine that a person looked into to see the movie.   Et voila!  You could watch a movie.  They were innocent at first, until 1895 when they showed The Execution of Mary Stuart (a/k/a Mary, Queen of Scots).

MEANWHILE, two brothers in France, Auguste and Louis Lumiere, were working on the same ideas.  They grew up working in their father’s factory producing photographic plates (they invented a machine to automate the process).  In 1892 they patented a new version of perforating film to move it through a projector, which was originally invented by a man named Emile Reynaud).  The first thing they recorded was workers leaving their factory in March of 1895.  Then in 1898, they released Le Squelette Joyeux.

Shortly after that, a French illusionist/filmmaker named Georges Melies saw the film.  He wanted to buy their projector but they were having none of it.  Instead, he bought an animotograph (an early form of projector a/k/a the theatrograph) and modified it to be a camera.  He taught himself how to develop and print his own film. He used techniques like double exposure, stop motion, and slow motion, combined with tricks he used in his theatre acts.  His shorts are considered horror/comedy, but his use of devils, skeletons, and things like that scared the hell out of the people that saw them! He started showing his movies at all of his theatre performances.  In 1896 he released his first short, Le Manoir du Diable. Here are a few other great Meleis shorts:

Another fun short to watch is The X Rays  (1897) – by George Albert Smith. One of my favorite shorts is Edison’s 1910 adaptation of Frankenstein. It’s a little bit longer than the others on the list (about 13 minutes). This link is to a restored version that is a little easier to see. If you want to see the original, click here.

And that my friends, is how it all started.  As time passed, the productions slowly improved, and over the years they got longer and scarier until they finally became all the glorious movies that we love today! So if you don’t have time to watch an entire movie, (and you finished reading everything on Scary Matter, of course), follow the links here and give these quick spook tales a try.  Let me know what you think of them.