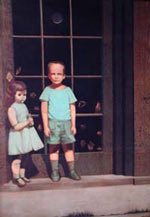 The Hands Resist Him

This was painted by Bill Stoneham in 1974. It started out innocently. He found an old picture of him and a childhood friend that was taken when he was around five. He decided to paint it. So simple, a painting of a pleasant memory. Nothing sinister. Just an artist making a painting. In 1972, Bill’s first wife, Rhoann, wrote a poem called “Hands Resist Him”. It was about him being adopted and never knowing his siblings. Bill was under contract with gallery owner Charles Feingarten to produce two paintings a month, for a fee of $200 each. Bill used the title of his wife’s poem as the title for his painting.

When he painted the picture he made some changes. The little girl in the original was now a doll with big black eyes and he added handprints on the door. He was asked why he added the hands:

“The hands were all of the possibilities. You were left with the question, ‘Are these disembodied hands? Are they dismembered, floating there in space? Or are they connected to bodies?”

He had a showing of his paintings, and after a review by an art critic for the Los Angeles Times named Henry Seldis, The Hands Resist Him was purchased by actor John Marley (the man that woke up next to horse’s head in The Godfather. Not long after the painting was sold, the art critic Henry Seldis died ( the police ruled it a suicide). So did the man that owned the gallery. In 1984, John Marley died after open-heart surgery. All three deaths are supposedly connected to the painting.

The painting disappeared until it was put on eBay by its new owner in 2000, who claimed it was haunted. His daughters were afraid of it and told him that the images would move during the night and sometimes leave the painting and come into the room. He set up a motion sensor camera to prove that nothing was happening. He claims that the camera caught the girl holding a gun and forcing the boy out of the painting. The auction included those pictures.

“When we received this painting, we thought it was really good art. A “Picker” had found it abandoned behind an old brewery. At the time we wondered a little why a seemingly perfectly fine painting would be discarded like that. (Today we don’t!) One morning our four-and-a-half-year-old daughter claimed that the children in the picture were fighting, and coming into the room during the night. Now, I don’t believe in UFOs or Elvis being alive, but my husband was alarmed. To my amusement, he set up a motion-triggered camera for the nights. After three nights there were pictures. The last two pictures shown are from that ‘stakeout’. After seeing the boy seemingly exiting the painting under threat, we decided, the painting has to go. Please judge for yourself. Before you do, please read the following warning and disclaimer.

“…WARNING: Do not bid on this painting if you are susceptible to stress-related disease, [or if you are] faint of heart or are unfamiliar with supernatural events. By bidding on this painting, you agree to release the owners of all liability in relation to the sale, or any events happening after the sale, that might be contributed to this painting. This painting may or may not possess supernatural powers that could impact or change your life. However, by bidding you agree to exclusively bid on the value of the artwork, with disregard to the last two photos featured in this auction, and hold the owners harmless in regard to them and their impact, expressed or implied. Now that we got this out of the way, one question to you eBayers. We want our house to be blessed after the painting is gone, does anybody know, who is qualified to do that? The size of the painting is 24 by 36 inches, so it is rather large. As I have had several questions, here the following answers. There was no odor left behind in the room. There were no voices, or the smell of gunpowder, no food prints or strange fluids on the wall. To deter questions in this direction, there are no ghosts in this world, no supernatural powers, this is just a painting, and most of these things have an explanation, in this case probably a fluke light effect. I encourage you to bid on the artwork, and consider the last two photographs as pure entertainment, and please do not take them into consideration, when bidding. As we think it is a good idea to bless any house, we still welcome input into that procedure.”

Needless to say, once the story got out, thousands of people looked at the listing. Some even said that after they looked at it, it did things like made them sick, made their computer have problems, made people hear voices, and even blackout. It’s been known as the “Haunted eBay Painting”, ever since.

It was bought by Kim Smith of the Perception Gallery in Michigan. Since she bought it, she hasn’t had any unusual experiences, and it’s now kept in storage in the gallery.

Bill Stoneham was amazed at the attention and by reports of the supernatural activity. Zak Bagans of Ghost Adventures heard the story and commissioned a sequel to the original and Stoneham accepted. The sequel is called “Renaissance at the Threshold”. It’s the same background as the original, but the boy and the doll have aged forty years. Then Bagans asked for a prequel painting. The prequel is called “The Hands Invent Him”. In it, Stoneham painted himself as a boy with a paintbrush, and the girl is on the other side of the door. That painting is hanging in Bagans’ Haunted Museum.