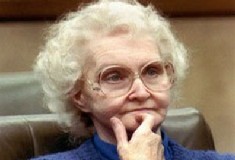 Sometimes it’s the ones you expect the least that will murder the most!

Dorothea Puente was a sweet old woman that rented rooms in her house to elderly and disabled people. She was happy to take care of them, give them their meds, and even hold their hands if they needed it. Oh yeah, and she was also happy to murder them, bury them in her backyard, and steal their social security and pension checks.

Dorothea was born in California in 1929.  Her parents died and she grew up in an orphanage starting when she was 10. She got married at 16 to a man named Fred McFaul. They had two girls, one went to live with Dorothea’s relatives, and one she put up for adoption. Dorothea got pregnant but had a miscarriage, and her husband left her. Their marriage only lasted three years.

Dorothea’s life of crime started small. She spent six months in jail for check forgery in 1948. Then she was arrested in 1960 for running a brothel and spent another three months in jail. In between the two jail terms, Dorothea got married again to Axl Johanson.  After her second prison stay, she became a nurse’s aide to help care for the elderly and worked her way up to managing boarding houses. It looked like Dorothea had finally turned her life around. But looks can be deceiving.

In 1966 she got a divorce and married Roberto Puente. Then Dorothea started running her own boarding house. She got married for a fourth time (apparently the third time wasn’t the charm) to Pedro Montalvo, but he was a drunk, and they were only married for a few months.

Meanwhile, her boarding house was doing very well. She was known for accepting people that had drug addictions and mental health problems and was respected for it.  For the most part, her borders didn’t have friends or family to care for them. But they did have social security checks. Due to the disabilities of some of her boarders, they needed help cashing their checks. Dorothea of course offered to help them. On the outside, she was a sweet, generous woman. She cooked and cleaned for them. She gave them their medicine and comfort when they needed it.

She had partnered with a woman named Ruth Monroe, who eventually moved in with Dorothea. Soon after that, she died from an overdose of Tylenol and Codeine. Dorothea told the police that Ruth must have committed suicide because she had been depressed, and the police believed her. Ruth left Dorothea $6,000. After that, one of her borders accused her of drugging him and stealing his pension checks. She spent five years in jail after being convicted on three counts of theft. While she was in jail, she became pen pals with a man named Everson Gillmouth. He was 77 years old. They started a relationship. She got out of jail after only three years, and they drove off in his pickup truck, fell in love, got engaged, and rented themselves an apartment.

Dorothea started looking for a handyman to install paneling in their apartment. She hired a man named Ismael Florez and paid him $800 and gave him a pickup truck. One day she asked him to build a box that was 6 ft x 3ft x 2ft, and later asked him to help her get rid of it because she had filled it with junk. They dumped it near a river in the area where people sometimes threw stuff away. A fisherman found it and called the police. The decomposing body they found inside it turned out to be Everson Gillmouth, although the body wasn’t identified until three years later. Dorothea covered up his disappearance by writing to his family to tell them that he was sick, and continued to cash his pension checks.

Dorothea began taking in borders again, even though her parole forbade her from caring for the elderly and handling their checks. She cashed their checks before they saw them, and said she was keeping some of it to cover their expenses. Oddly enough, no matter how many times parole agents visited, they never filed charges. Dorothea hired another handyman and had him cart out dirt from the basement and replace a garage with a concrete slab. People started getting suspicious when he disappeared.

The police were called after a social worker reported one of her boarders, Alvaro Montoya missing. When they came to speak to her they noticed some dirt that had been disturbed in her backyard. They did some digging and found the body of another border named Leona Carpenter. After investigating the property further, they found seven more bodies. Dorothea was charged with nine murders. After being convicted of three murders, she was sentenced to two life sentences. Dorothea spent the rest of her life in the Central California Woman’s Facility. She died of natural causes in 2011. She was 82.

A few other interesting tidbits: