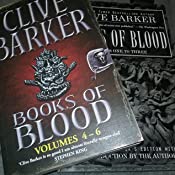 “Everybody is a book of blood; wherever we’re opened, we’re red…” – Clive Barker

You all know Clive Barker, but did you know that he wrote short stories? You’ve probably seen Hellraiser (all of them)  and some of you may have even read the books. But sometimes you just need a little quick bedtime story. These really hit the scary spot!

Each story will suck you in and keep you there until it’s over. His imagination and eye for detail and imagination make you visualize everything he’s writing. So much so, that Stephen King said…” Barker scares even me. What he does in the Books of Blood makes the rest of us look like we’ve been asleep for the last ten years. Some of the stories were so creepily awful that I literally could not read them alone; others go up and over the edge and into gruesome territory.

Barker has a sick, twisted, frightening imagination and that’s why we love him. His stories are not delicate, or subtle, and definitely not politically correct. And I don’t ever want them to be. At every turn, he’s bound to throw some gore, violence, or sex at you. So if you’re easily grossed out or offended I don’t recommend him.  There were definitely a few parts of the book that were grosser than they needed to be. But that’s to be expected.

The Midnight Meat Train – The Old Gods are not dead, and they’re hungry. What better place to get something to eat than the NYC subway? This one is messy. Gory messy. Actually, it’s pretty fucked up. This is Clive Barker after all! And I loved the ending! Definitely not for the squeamish!

Dread – This is a psychological scare. A philosophy student is obsessed with dreams where he’s being ax murdered by clowns. (I don’t blame him!). He starts experimenting with other students to see their reactions to things that terrify them. Not a good idea. Did I mention clowns? This one extra got me!

New Murders in the Rue Morgue – What if Poe’s story was a true story? Clive Barker mixed with Edgar Allen Poe. “Nuff said!

Human Remains – This gives a little Picture of Dorian Gray vibe. Gavin is a prostitute and uses his looks to his advantage. And he’s more than a little afraid of getting old and losing his pretty face. Then he went home with a customer that has a life-size doll in his bathroom. And it looks like Gavin.

BTW – Books of Blood was made into a series on Hulu