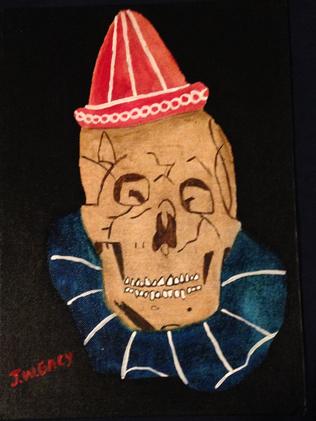 People love to collect stuff. Stamps, coins, rocks- you name it and there’s probably someone who collects it. Some people collect memorabilia from important moments in their life. Murderabilia is something completely different. Murderabilia is items related to murders and the people who commit them. And there’s a huge market for the stuff.

There is no shortage of true crime interest here at Scary Matter (obviously). And we have purchased our fair share of true crime-related products. We have plenty of books around the office. But our collection consists of books, things like a bowl and spoon that say “cereal killer”, and a Pogo the Clown snowglobe made by Professor Tooth’s Odditorium. (It’s a great site – go check it out).

Thanks to the internet, streaming services, and a very long quarantine, there has been an exploding interest in true crime. People who were never interested in serial killers now find themselves binging every show they can find. For those of us that have always been interested, it’s a goldmine of information. This newfound popularity has fueled the murderabilia industry.

The term murderabilia was coined by Andy Kahan, Director of the Mayor’s Crime Victims Assistance Office in Houston, Texas. He acted on behalf of families that have had a loved one murdered by a serial killer. Because of Mr. Kahan, the Son of Sam Law was created. The law prohibited criminals from making money from the sale of anything relating to them. It also banned serial killer memorabilia from being sold on eBay.

The original Son of Sam Law was ruled unconstitutional by the U.S. Supreme Court because it was preventing the sale of items related to killers, including the publication of books, even when the killer was not profiting from it. In 2001, New York adopted a new Son of Sam Law. The new law states that victims of crimes be notified whenever a person convicted of a crime receives $10,000 or more, from any source. It has a statute of limitations that gives victims an extended period of time to sue the perpetrator in civil court for their crimes. The law also authorizes a state agency, the Crime Victims’ Board, to act on the victims’ behalf in some limited circumstances.

As we all know, you can find just about anything online. If you follow anything on Instagram related to true crime, I’m sure your feed is constantly full of ads for things like “True Crime and Wine” glasses and “Serial Killer Documentaries and Chill” sweatshirts. It’s everywhere now. It’s all harmless fun. There are people who are interested in the psychology behind these crimes, and buy things that are informative, interesting, or kind of kitschy.

Some people buy things for all the wrong reasons. You have the girls who have crushes on serial killers that want pictures to drool over. And then there are the people that practically idolize serial killers. They look to buy murderabilia out of some kind of hero worship. They look to buy locks of hair, toenail clippings…anything that makes them feel a personal connection to these people.

When the junk in Ed Gein’s yard was put up for auction, thousands bid for his things. The guy that bought his pickup truck put it in a tent and charged admission to see it. He made tons of money. When Dahmer’s things were going to auction, people went crazy when they heard. Much to their dismay, a Milwaukee civic group was so disgusted, that they bought all of it and destroyed everything. Convicted killers will do all they can to find someone willing to sell whatever kind of art they make while they are in jail, or for someone to interview them and publish their side of the story.

Now don’t get me wrong, the majority of collectors do not suffer from any type of personality disorder. There are plenty of people out there who collect things because of their historical value. Letters they’ve written, art that they’ve done. Even things from a killer’s former home. These are auctioned off for huge amounts of money. People have purchased criminal files and trial paperwork. And plenty of people will pay to go to the place where a serial killer brought their victims. One of the things that people look for is artwork that serial killers have done. I’ve seen some and they have are actually quite good.

If you’re interested in murderabilia, but don’t want to collect it, stop by The Museum of Death in California. They have crime scene photos, things belonging to the Manson Family, and artwork from several serial killers. To some people those things are interesting, to others, it’s morbid. But let’s face it, we all have an innate morbid curiosity to one extent or another. You can also head on over to the Alcatraz East Crime Museum and see Ted Bundy’s Volkswagon.

There’s a good article on Oxygen.com titled “What is Murderabilia? The strange allure of artifacts from serial killers, explained”. It has an interview with Dementia Von Grimm, a U.K. drag queen that collects murderabilia. She explains how and why she got involved in it, and some of the people she’s encountered in the process. Click the link above and check it out.

I recently had the pleasure of talking to the man behind “The Collection” podcast by Rocky the Collector. He owns several pieces of murderabilia and was kind enough to show them to me. He has a newspaper with the headline “Wanted: Son of Sam”, an original photo of Manson in jail, a piece of correspondence written by David Berkowitz, a business card from John Wayne Gacy, and a jar with some of Charles Manson’s hair in it!

I was curious as to how and why he got started collecting it. I asked if I could pick his brain and he took off the top of his skull and I jumped right in. He received his first pieces as gifts and being a true crime buff, his interest was piqued. Then, he was at a serial killer-themed haunted house in New York, when he discovered that it had real things from Charles Manson and John Wayne Gacy. He decided to try collecting on his own.

Then he said something about the word murderabilia that I had never thought of before… ”People that collect true crime for a long time like myself hate that term. I feel like it was coined by folks trying to stop people from collecting”. I like his take on murderabilia. That it is a part of history, and it’s important to save all kinds of history – even the dark parts. He’s not wrong. If you’ve ever thought of starting up your own collection, he’s got some advice for you: “…Don’t stop searching for pieces to collect, and you always find the coolest pieces in such strange locations”. He said he’s found things in random places like a pawnshop in Harlem and a church basement sale. Follow him on Instagram @rocky_the_collector and check out his podcast “The Collection”, by Rocky the Collector. You can find it pretty much anywhere podcasts are streaming.