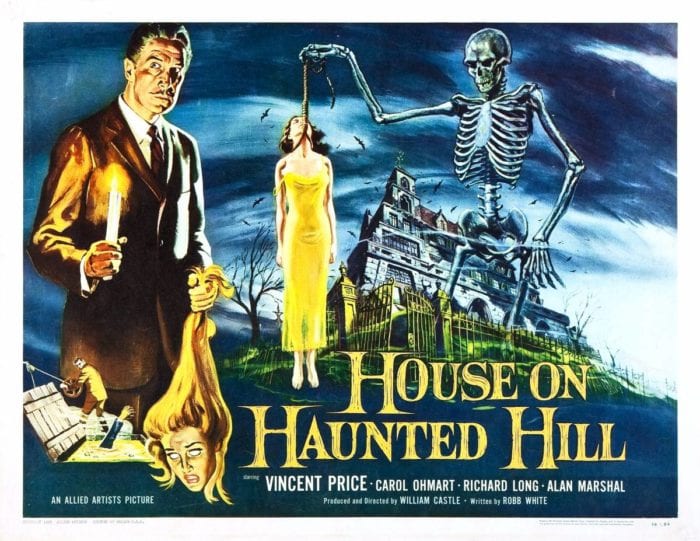 I just watched House on Haunted Hill (the original 1958 version). I had such a good time! It was directed by William Castle and stars Vincent Price, so you know it’s going to be good! The movie opens with a black screen, spooky noises, and a couple of floating heads, giving you a little taste of what’s to come. Based on the book by Shirley Jackson, It is a low-budget,  no special effects, piece of classic horror brilliance.

Vincent Price is, of course, evil, creepy perfection. (click here to read our article about him) He plays a very rich man named Frederick Loren that rents out a haunted mansion to throw a birthday party for his wife and invites five people who have never met him. He offers $10,000 to anyone that stays until morning. The party guests have until midnight to decide if they are staying, and then they will be locked in. They are all confused about why they were invited. They know who he is, but not why he invited them. All they know is that they want that cash. He also promises to pay the money to their estate in the event that they don’t survive.

The house is dirty and covered in cobwebs as any self-respecting haunted house should be. It’s owned by a man named Watson Pritchard. Pritchard is an alcoholic and an expert on everything about the house, and the ghosts that haunt it. He’s more than willing to take the party guests on a tour of the house and explain each murder as they go. While they are touring the house the ghosts already start making their presence known.

Since this is a 1950’s film, there are no big-budget special effects and absolutely no gore. It’s kind of hokey, and a little funny at times.  The scenes with Frederick and his wife Annabelle are great. They hate each other and the dialogue shows it. Even though it’s her party, she’s not going.

William Castle is the king of low-budget, hokey horror movies. Follow this link to our article about him and see why he was called “The King of the Gimmick”.  He gives us doors that close and lock on their own, ghosts, blood dripping from ceilings, floating heads, and skeletons. All backed by some spooky music. If you haven’t seen it yet, there’s a nice plot twist at the end. Though by today’s standards it isn’t a scary movie, it is still one of the top classic horror movies – and for a good reason!

Here’s a little trivia for you: