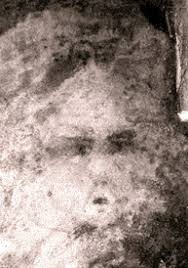 The House of Faces

If you see pictures of Andalusia, Spain, you will immediately want to go visit. Old stone buildings, gorgeous beaches, and mountains. I could keep going, but then this would become a travel article. You’re going to have to plan your own vacation, I’m here for a different reason. I want to talk about a little village in Andalusia called Belmez de La Moraleda and its “The House of Faces”.

The house belonged to Maria Gomez Pereira and her husband Juan Pereira. In August of 1971, Maria walked into her kitchen and noticed a stain on the concrete floor. Then over the next few days, the stain started to change and looked more like a face. It also moved to different spots on the floor. It was a little unnerving, so Juan and their son Miguel used a pickax to remove the face and put down fresh concrete. The face came back. And then more started to show up.

The story spread through the town all the way to the mayor. He told them not to destroy any more pieces of the floor. He sent workers to come and carefully remove the floor, so the faces could be studied. Shortly after a new floor was put in, the faces were back. And the locals that wanted to see it weren’t too far behind them. And then came the parapsychologists.

A professor from Madrid named German De Argumosa did some research and found that a seventeenth-century governor had killed five people, possibly in or near the house. During the excavation of the floor, the Pereiras got another surprise. Workers found skeletons buried about ten feet under the house, some with no heads. They were dated to be about 700 years old. The skeletons were reburied in a local Catholic cemetery. Then the hole was filled in and the floor replaced. But several weeks later the faces were back.

The floor that the Mayor had removed was tested. The scientists couldn’t figure out how the faces had been made. Professor De Argumosa was also a paranormal investigator. He supposedly recorded several EVPs. He said they sounded like “hell mixed with a brothel” (I always wondered what that would sound like). He also said he recorded the voice of a child. One of the faces that appeared actually changed its expression, and others followed after that. De Argumosa covered the floor to protect it until he could study it more. He even paid part of the money to have a new kitchen built in another part of the house. The faces started forming there too.

In 1981, a paranormal investigator named Jose Martinez Romero investigated the house. He said he witnessed the faces appear and disappear on the new kitchen floor. He went back with another investigator named Andrew MacKenzie in 1988. The faces looked almost faded. Romero believed that the faces were somehow linked to Maria’s mind. She was said to have been a medium. He believed that when Maria died, the faces would disappear. The theory of several paranormal investigators was that Maria was creating the faces through “thoughtography”. Thoughtography is projecting images from a person’s mind onto objects.

Meanwhile, the Pereiras were being accused of faking it to make money. A commission had been formed to figure out how the Pereiras were making the faces. It was assumed that they had used paint, chemicals, or acid to create, and then remove the faces.

Different tests were done on the images to prove how they were made. All the tests were inconclusive. No one could find any paint or other substance that could have been used to make the faces appear. Attempts by chemists to recreate the faces were unsuccessful. It was also suggested that some kind of oxidizing chemical was used. To this day, no one has figured it out.

Maria died in 2004. The faces are still appearing. Haunting or hoax? I’ll leave that up to you my friends.