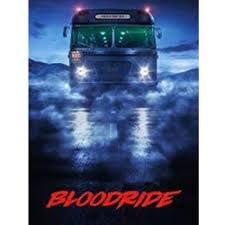 Snakker du norsk? If you don’t know what that means, you’re gonna need subtitles for this one! Bloodride is a Norwegian horror anthology series on Netflix. I don’t normally like watching things that I need subtitles for, but I’m learning Norwegian so I figured I’d give it a try. I found this easy to watch. They don’t give you a ton of dialogue to read at once, so it’s easy to follow. You can also watch it dubbed in English if that doesn’t bother you. The six episodes are about thirty minutes long. There is only one season, but I hear a second is in the works.

Bloodride is technically described as “chilling, yet jam-packed with humor, and set in a realistic, yet weird universe. A series for family members who enjoy eerie stories and are entertained by blood-curdling horror.” Now granted, we would never get a description like that in America, but Scandinavia and Europe aren’t so uptight about things.

I had a good time watching it. It didn’t scare me, but it kept me interested. It’s kind of a horror/psychological thriller hybrid. I never try to figure out storylines and endings, so I enjoyed the twist endings. Keep in mind that this is not a big-budget studio production. Sometimes the dialogue can be a little lacking, and the special effects aren’t the most amazing. But if it’s murder you want, this has plenty!

Full disclosure – If I like the opening of a show, I’ll watch every episode, and I really like the beginning of this one. There are a bunch of people riding a bus driven by a delightfully evil-looking bus driver. That man needs his own horror show! On their way to hell maybe – who knows? Plus, the opening tells us which passenger the episode is about (yes I know, it doesn’t matter).

As with all anthologies, some episodes are better than others. There is some dark humor in the episodes, along with some clues about where the story is going. Some of the plotlines reminded me of other things I’ve seen. Here are the plotlines of the episodes (without giving anything away!):

I enjoyed the series and I’ll definitely watch the next season. If you’re looking for something a little different, I suggest that you give this a shot