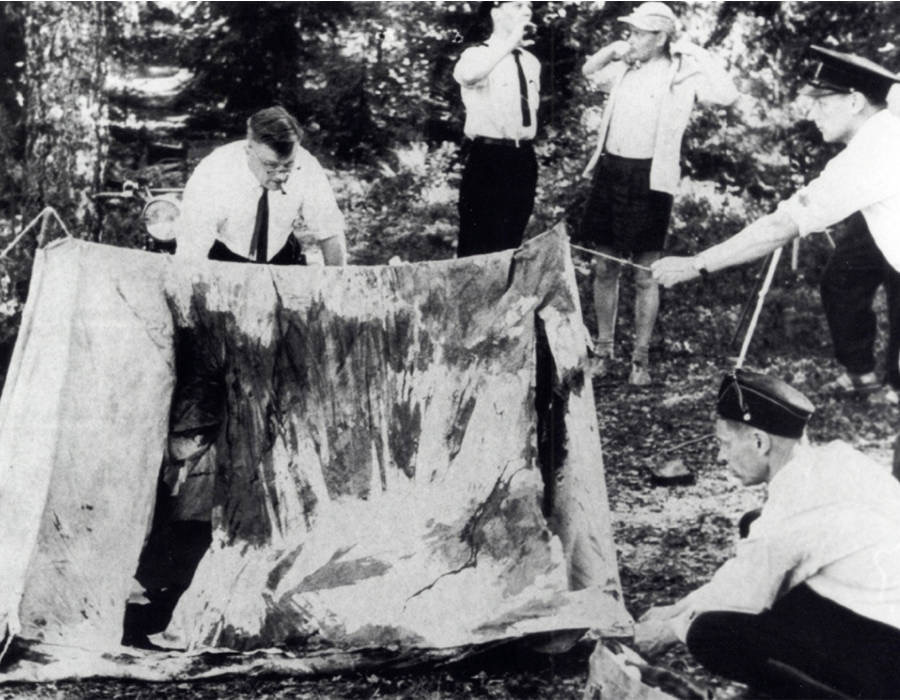 There is constant speculation that The Lake Bodom Murders, Finland’s most famous unsolved murders, was the inspiration for the original Friday the 13th.  The movie’s producers say no.  Other than the fact that both involved camping teenagers and murder, there aren’t really any other similarities, but once a rumor like that gets started, there’s no stopping it.

On June 5, 1960, two teenage girls named Maila Irmeli Björklund and Anja Tuulikki Mäki went camping with their boyfriends Seppo Antero Boisman and Nils Wilhelm Gustafsson.  The camping trip ended with the two girls and Seppo Boisman dead, and Nils Gustafsson in the hospital.  The three teenagers were found stabbed and beaten.  Maila Björklund was found on top of the tent, beaten, naked from the waist down, and stabbed multiple times.  Anja Mäki and Seppo Boisman’s bodies were found inside the tent.  Nils Gustafsson was found next to Maila, but alive.  He said he didn’t remember anything about the attack except someone dressed in black with bright red eyes.

The tent was spotted the next morning by some kids out birdwatching.  They noticed a torn up tent and a man with blond hair walking away from it, but didn’t see the bodies.   The bodies were discovered a few hours later by a man passing near the campsite.  Their bikes were there, but the keys were missing.  The police found Gustafsson’s shoes a half mile from the tent.  The police didn’t properly seal off the campsite and there were people walking all over, making it complicated to find any evidence.

There were only a few circumstantial suspects:  One person of interest was Karl Valdemar Gyllström.  He ran a kiosk business on the campgrounds and was supposedly a nasty man who often had problems with the campers because of all the noise they made.  The rumor is that he snapped that night and killed them.  He supposedly got drunk one night and confessed to doing it, but his wife said he was home in bed that night and the police couldn’t prove that she was lying.  The rumor got worse when he committed suicide by drowning himself in the lake.

There were briefly two other suspects:  A man named Pauli Luoma, who was proven to be out of town the night of the murders, and Pentti Soinenen who confessed to the murders while he was in jail for something else.  There was no evidence to show he may have done it, and the police just assumed it was jailhouse bragging.   And Hans Assman (yeah, I know).  He was supposedly a former KGB spy and loner that lived near Lake Bodom.  The second suspect remained of interest until 2004. His name was Hans Assmann and he was rumored to be a former KGB spy living very near to the shores of Lake Bodom.  He had gone to Helsinki Surgical Hospital the day after the attack.  His fingers were covered in dirt and his clothes had bloody, red stains.  The staff said that Assman was nervous and aggressive.  The police questioned him, and said he had a solid alibi.

In 2004 the police said that forensic advances had uncovered new DNA evidence on the shoes, reopened the case, and arrested Nils Gustafsson.  Evidence showed the blood on his shoes belonged to all of the other victims, but none of it was his, and that a woman had come forward and said that the boys had approached her tent and that Gustafsson had been acting aggressive.  At his trial, the prosecutors said he got drunk, got into a fight with Maila Björklund, and killed her. Prosecutors said that was why her injuries were much more severe than the others, and why her body had been found outside the tent. They believed that he had a fight with Seppo Boisman, which would explain the injuries on his face. Then he killed the other two teens so there would be no witnesses.   He was convicted and given life in prison, but appealed it, and was released after a year.  The murders are still unsolved, and are now a local legend.

So, not exactly Friday the 13th, but definitely an interesting (but very sad) story.