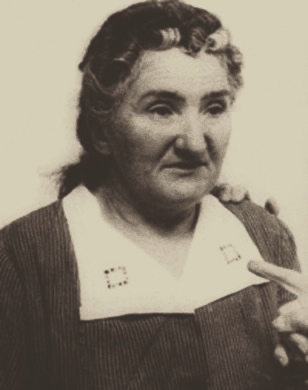 Leonarda Cianculli was born on April 18, 1894, in a small town in Italy called Avellino.  While she was a young girl she tried to commit suicide twice.  She married Raffaele Pansardi in 1917, but she believed that her parents cursed her because they had wanted to marry her to someone else. She and her husband moved to Potenza.  Then Leonarda was arrested and sent to jail for fraud.  After she got out, they lost their house in an earthquake.  After the quake, they moved to Correggio.  Leonarda opened up a shop in town.

To really further her belief in that she was cursed, during their marriage, she got pregnant seventeen times.  Ten of the kids died when they were young and she had three miscarriages.  (At that point, I would start to think that was cursed too!).  She went to see a Romani gypsy fortune teller and that didn’t go so well either.  The gypsy told her, “In your right hand, I see prison, and in your left hand, I see a criminal asylum”.  In 1939, her favorite son, Giuseppe, enlisted in the Italian Army to fight in World War 2.  Leonarda decided that human sacrifices would be the only way to keep her son safe.

That year, she killed her first victim: a woman named Faustina Setti, who had come to her for help finding a husband.  Leonarda said she knew someone for her, and that Faustina should write letters to her family telling them that she was going away to meet him.  After she did, Leonarda drugged her, killed her with an ax, and cut her into nine pieces.  She explained in detail what she did with the victims:

“I threw the pieces in a pot, added seven kilos (around 15 pounds) of caustic soda which  I bought to make soap, and stirred the whole mixture until the pieces dissolved into a thick, dark mush that I poured into several buckets and emptied in a nearby septic tank. As for the blood in the basin, I waited until it coagulated, dried it in the oven, and mixed it with flour, sugar, chocolate, milk, and eggs, as well as a bit of margarine, kneading all the ingredients together.  I made lots of crunchy tea cakes and served them to the ladies who came to visit, though Giuseppe and I ate them too.”

“She ended up in the pot like the other two.  Her flesh was fat and white.  When it had melted I added a bottle of cologne and after a long time on boil, I was able to make some most acceptable creamy soap.  I gave bars to my neighbors and acquaintances.  The cakes too were better.  That woman was really sweet.”

After a while, Virginia Cacioppa’s sister got worried.  She knew the last place she had been was at the Cianciulli house.  She went to the police.   After investigating, the police arrested Leonarda’s son Giuseppe.  She confessed and told the police everything to save his life.  She wasn’t sorry at all.  She was tried in 1946.   There was a point in the trial when she said “ I gave the copper ladle which I used to skim fat off the kettles to my country, which was so badly in need of metal during the last days of war”. She was apparently very proud of it.  She was found guilty and sentenced to thirty years in prison and three years in a criminal asylum.  Looks like fortune tellers are right sometimes.  She died in the criminal asylum on October 13, 1970.

2 thoughts on “The Soap-Maker of Corregio”