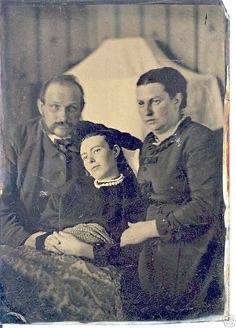 In England, 1861,  Prince Albert died when he was only 42.  His wife, Queen Victoria, was so devastated that she wore black for the rest of her life.  The rest of the country started doing the same thing when a loved one died, and the death customs grew from there.  Although we still wear black and dark colors today, we are pretty lucky that the rest of the customs faded away over time.  Though these customs were tradition back then, today we would consider them morbid AF and be totally freaked out if anyone suggested we do the same.

In those days, people usually died at home.  As soon as someone died, all of the curtains were closed.  The clocks were all stopped in order to “freeze time” and prevent any more bad luck, and all the mirrors were covered so that the dead person’s spirit wouldn’t get trapped in them. If you saw your own reflection in their mirror, some people said you would die too. Pictures in the house were put face down to keep the dead person from possessing someone on the picture.  A wreath would be put on the door so people knew someone had died there and funeral invitations were sent out

The funeral was held in the house, so the body was cleaned, dressed, and put in a coffin where it was surrounded by flowers to help hide the smell.  The coffin was left on display in the parlor (living room) and left there until the day of the burial.  When the body was finally removed from the house it was carried out feet first.  This was supposed to keep them from beckoning someone to join them

Families wanted something to remember their dead relatives with.  This was called a “Memento Mori” – Latin for “remember you must die”.   Sometimes it was something simple like using locks of hair to make jewelry like a locket or a bracelet.  There were several other ones that are pretty gruesome by today’s standards:

There were also mourning rules created (for the women, of course).  For two years after a woman’s husband died, she had to wear black dresses made of crepe (a dull form of silk that was very uncomfortable).  They wore a veil and couldn’t wear any jewelry.   For the first year, they weren’t allowed to leave the house other than to go to church.