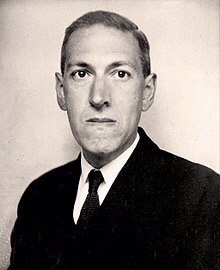 The Call of H.P. Lovecraft

I wonder what the world of horror would be like without Howard  Philips Lovecraft??  Read interviews with almost any horror writer, and they will say that he was one of their biggest early influences. Stephen King has been quoted as saying,   “I think it is beyond doubt that H. P. Lovecraft has yet to be surpassed as the twentieth century’s greatest practitioner of the classic horror tale.”  Do you know a horror fan that doesn’t love The Call of Cthulhu?  I don’t!

As much as I love The Call of Cthulhu, I think my favorite Lovecraft is The Case of Charles Dexter Ward.  Ward is possessed by one of his ancestors (who was a black magic warlock),  and reads black magic incantations that let some pretty evil spirits loose.  Then he has to figure out how to stop them. If you haven’t read it, you should.

Lovecraft had his own unique writing style.  First published in the pulp magazines of the day, his tales have inspired generations of writers and creative artists and helped shape pop culture. He blended Gothic traditions with science fiction. He was a huge fan of Edgar Allen Poe, science and astronomy.   He gave us stories haunted by ancient gods, alien races, lost cultures, forbidden books, mad scientists, and complete madness! He created the famous Necronomicon.  Not only did he put it in several of his own books, but it’s been used by many other writers, which he was supposedly very happy about.

H.P Lovecraft was born on August 20, 1890.  When he was three, his father, a traveling salesman, had a nervous breakdown in a hotel room in Chicago.  He was admitted to Butler Hospital and died in 1898 of complications from untreated syphilis.  Lovecraft was raised by his mother and her sisters and parents.  Lovecraft started reading when he was young and read things that were very advanced.  His grandfather encouraged it and got his grandson interested in stories that were on the weird side.  (Best grandpa ever!)

He started writing poems when he was 7.  He was inspired by the Odyssey and other mythology.   Lovecraft said that when he was a kid he loved the Roman pantheon of gods,  and believed they were the expressions of divinity, even though he was raised Christian.  He said that he found out that Santa wasn’t real when he was only 5,  and then wanted to know why “God is not equally a myth?” He eventually became an atheist.  When he was around 8, he got interested in astronomy and chemistry and said astronomy became a guiding influence on his world view. He had health problems when he was young and missed a lot of school.

In 1904 his grandfather died, and he and his mother had to move into a small, cramped apartment.  He was devastated, lost interest in reading and writing, and even thought about killing himself.  He had a nervous breakdown in 1908 and never graduated high school.  From 1908 to 1913 he was basically a hermit.  He spent the time locked in the house with his mother, who never really got over her husband’s death.  They had a very unhealthy relationship because she developed a pathological love-hate relationship with her son.

Lovecraft spent a lot of his time at home reading fiction magazines.  He wrote a letter to one called The Argosy, criticizing a story they published.  The magazine printed it, the readers hated what he said, and he defended himself.    The president of the United Amateur Press Association read it all and asked Lovecraft to join the Association in 1914. Lovecraft published thirteen issues of his own magazine called The Conservative, and contributed poetry and essays to other journals. He eventually became president and Official Editor of the Association and was also president of the National Amateur Press Association. This was what got him out of the funk he was in and got him writing again.  He wrote short stories like The Beast in the Cave, The Alchemist.   He was also a huge fan of writing letters to his friends. (Too bad there wasn’t email back then). In 1923, a magazine called Weird Tales bought some of his stories, and in 1928 they published one of his most famous horror stories, The Call of Cthulhu.

Lovecraft was almost broke by the time he died.  He had cancer of the small intestine and died on March 15, 1937. He spent most of his time working as a ghostwriter to pay bills, and it’s estimated that during his life he wrote more than 100 thousand letters to friends.  He left behind some unpublished novels and over 60 short stories.  After he died, two of his friends named August Derleth and Donald Wandrei, started a publishing company named Arkham House to preserve his work.

I learned a few things about him that I didn’t know while I was researching him.  Did you know any of this?