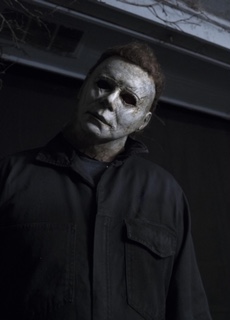 The Story of “The Shape”

Of all the slashers in all the horror movies, Michael Myers (a/k/a “The Shape”)  is the one closest to my black little heart.  He’s the OG.  No one, not even Dr. Loomis, is quite sure what happened to him.  How he went from adorable little trick or treater to killer.  Personally, my theory is that dressing as a clown warped his mind, but my coulrophobia is a discussion for another time.  I mean, catching your sister having sex is definitely gross, but not worthy of murder!!  Yet here we are forty-two years and almost thirteen movies later (hang in there fans….Halloween Ends will get here), and Michael is still going strong and keeps coming back for more, just like us!

Michael is the creation of John Carpenter.  After graduate school, Carpenter was asked to direct a low budget film called The Babysitter Murders. It was originally about an escaped psycho that spends a few days running around killing babysitters.  Carpenter wasn’t thrilled with the script, so he played around with it a bit.  He remembered a time when he was in college and his psych class visited a mental hospital.  He explained in the documentary ‘Halloween’: A Cut Above the Rest he was there he saw a young boy that had a “blank, pale, emotionless face, and the blackest eyes… the devil’s eyes”  (recognize the quote?).   Although Michael is described as “pure evil”, Carpenter based his slow movements, head tit and blank stare on what he saw that day in the hospital.

Nick Castle was the first Michael and played him to perfection!  I love how he just stares at someone and tilts his head.  I could never decide if he was confused, or admiring his handiwork.  In reality he is assessing the situation and planning his next kill. Either way, it’s beautiful.  And I love when he gets pissed!  He looks like he wants to yell “Fuck” and throw his hands up in exasperation (and any of you who have seen me lose it know exactly what I’m talking about!).  The way Castle manages to show us that Michael is frustrated, without being able to use words or facial expressions, is great.  One scene I love the most is when he’s on the floor, supposedly dead, and does a slow sit up.  I wish my abs were that strong!

The Halloween movies have never really explained how Michael keeps coming back (except  in #3 and we won’t talk about that one).  And honestly I’ve never really cared.  The best explanation was given by Debra Hill, John Carpenter’s writing partner:  “The idea that you couldn’t kill evil, and that was how we came about the story,  We went back to the old idea of Samhain, that Halloween was the night where all the souls are let out to wreak havoc on the living, and then came up with the story about the most evil kid who ever lived.”   I”m just going  to ignore that!  I like the mystery.  Pure evil, as Dr. Loomis puts it.  Evil can’t be explained. Maybe that’s why Dr. Loomis calls him “it”, instead of Michael.

Halloween will forever be my favorite movie….have you seen it? It has all of my favorite things.  Halloween, a haunted house, creepy music, a masked killer, what’s not to love?  And they used William Shatner as a starting point for Michael’s mask!   I suddenly believed in love at first sight!  The casting of Jamie Lee Curtis as Lori Strode gets a chef’s kiss of approval.   Although I know that there are people that like the action in a movie to start pretty early, I love the time between killing his sister and starting his murder spree.  It was slow and creepy and exactly the right build up.  Lori has no clue why he seems to be after her, just that he is.

There have been decades-long debates about things that were never fully explained in the movie, but…..it’s just a movie, not a documentary.  Why he decides to escape, how he drives the car, pretty much how he knows anything more than he did when he was put in the institution.  Or why he went straight back to Haddonfield and after his sister.  Who cares??  I’ve seen a lot of things in my life that couldn’t be explained.  You can’t explain or define evil or the supernatural.  And even if you could, there’s always someone to argue, try to prove it wrong, or  just not believe it.

I know everyone has their own theories and their own favorite Halloween. People even have a favorite version of his mask.  Go for it!  I don’t argue or judge. (not even if you say your fave is Season of the Witch).  Personally, my heart will always belong to the O.G.  Now excuse me.  I think I’m gonna go watch a movie!