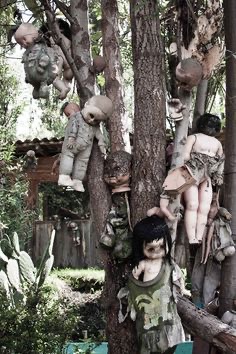 The Island of The Dolls

The Island of the Dolls (La Isla de las Muñecas) is a seriously creepy place!  Everywhere you look there are dolls hanging from trees.  Some are extremely old and decayed, and some are new.  Not a place I ever intend to visit.  The story goes that a man named Don Julian Santana Barrera (native of Xochimilco, Mexico City) left his wife and family one day and moved there to live alone.  No one knows why.  Not long after moving there, he was walking on the shore of the lake and found the body of a young girl that had drowned.  Later that day he found a doll floating in the lake and assumed it belonged to the little girl.

Don Julian said the girl was haunting him, and decided to hang the doll from a tree to honor the little girl.  For the next 50 years, he would take any dolls he could find, even if he found them in the garbage, and hang them from the trees on the island.  Some are headless, and some are missing other body parts. No one is quite sure if he found them like that, or started taking them apart himself.  And after 50 years, his doll collection pretty much took over the island.  The assumption is that Don Julian was not in his right state of mind, and it is believed that there was never a drowned girl in the first place.  Don Julian died in 2001……drowned in the lake.

The locals care for the island now. Rumor has it that it’s haunted AF.  It has turned into a ghost hunting tourist attraction.  People bring dolls of their own to hang.  They say that the spirits of both the little girl and Don Julian haunt the island.  And the dolls are supposedly haunted by the spirits of the little girls that used to own them.    People have claimed that dolls have moved on their own.  Some have said that the dolls talk.  And people have said that they’ve heard both the voice of a little girl and a man.  Even if the island isn’t haunted, it may as well be.  Imagine walking on a tiny abandoned island.  No electricity, dolls everywhere you look.  They’re weather beaten and filthy.  Blank eyes staring at you, bugs crawling in, out, and over them.  An empty hut that’s falling apart and has dolls hanging inside and out.  Pretty damn scary either way, yes?

1 thought on “The Island of The Dolls”