Why do we love creepy dolls? When I was a kid, my grandmother had a collection of very old dolls. Some of them dated back to when she was a kid (possibly earlier).  Spooky, glass-eyed, lifeless porcelain-faced dolls.  And as far as all her grandchildren were concerned..those dolls were evil as fuck! She kept a couple of them in plexiglass cases.  With locks. AND AIR HOLES! No joke. We were pretty sure that the locks were keeping them from murdering us. There’s no way those things weren’t possessed!

Why are dolls always possessed by evil angry spirits? Annabelle, Robert the Doll, Chucky, The Island of the Dolls – the list goes on. We’ve talked about a few of them here already (click the links to read our articles). Countless dolls are supposedly haunted and evil. They can hurt you, drive you insane, give you cancer, or even kill you. What’s up with that? At some point in your life, I’m sure you’ve seen a doll and thought “That’s going to kill someone in their sleep”.

The more real a doll looks, the creepier it seems. Why do some people find them so creepy, you ask?  It’s BECAUSE they look human, and also don’t. Our brains are wired to read facial expressions. When you see a face that has no expression your brain isn’t sure what to do with it. In the 70s a Japanese roboticist named  Masahiro Mori tried to explain it and called the feeling the “uncanny valley”. signifies an object that isn’t lifelike, but almost.

When you see a realistic-looking doll, part of your brain thinks it’s human. Then it just stares at you, with no words, movement, or expression.”  Your brain is expecting the doll to move, smile or talk. The fact that it just sits there is what gives you an uneasy feeling. Rationally you know what you’re looking at, but part of your subconscious is a little confused. So your brain just puts it in the “uncanny valley”.

Pediophobia is the fear of dolls. It’s believed to be a form of automatonophobia, which is a fear of humanoid figures. Most people don’t have it. But we have all seen a doll that creeps us out. The eyes look like they’re following you. Or they’re old, cracked, and dirty. Stare at them long enough and you’ll swear it moves just a little bit. Your brain recognizes all of it and can’t quite figure it out. So it goes into the uncanny valley.

Historically, dolls haven’t always been just toys. They were also used as representations of gods in ancient times. Witches make dolls called poppets for use in spells and don’t forget about voodoo dolls! Things like that are enough to make you wonder what goes on behind their lifeless eyes. Then came the stories of possessions. Demons or the spirits of the doll’s deceased owner can supposedly inhabit them. 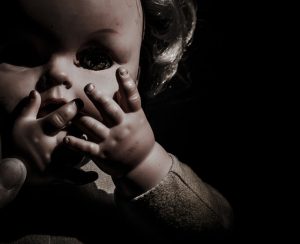 Now they eat, talk, sing, move, and do a whole host of other things. I know what you’re thinking and yes – they even do that. However, I haven’t heard of one of those being haunted. But if you have…PLEASE let us know! As dolls started to look more human, people started feeling uneasy around them.

Dolls were made of things like sticks, clay, and porcelain before the plastic dolls of today. People also used materials a little more macabre like bones. Some dolls even had human hair and teeth. Victorian mourning dolls were made of wax to resemble a deceased child. The child’s own hair and clothes were used. The dolls were not meant as toys. Today there are even dolls that will hold the ashes of a deceased child.

Before you know it people are crazy about evil dolls! They’re all the rage. If you scroll through the Internet it seems like everyone that has an old doll has a paranormal story to go with it. As much as my grandmother’s dolls creeped me out, I sadly have no story to go with them. (Even though they were 100% watching me!)

Creepy dolls have become so popular that people want to own them. Spend enough time on Etsy or eBay and find hundreds of “haunted” dolls for sale. It seems every old doll is possessed now. I wish I had all my grandmother’s creepy-ass dolls…those things would be worth a fortune. People are willing to pay big bucks for a supposedly haunted doll. They’ve been sold from $50 to up to several thousand! But the question that I keep asking is “Why”???

Listings for haunted dolls usually come with a detailed description of the “haunting”. There’s always a backstory and a list of things that the doll can supposedly do or make happen. Oftentimes the owner will change their minds, sometimes more than once. They claim to be afraid of what will happen to the buyer, or that the doll got angry at the thought of being sold. Eventually, the listing shows back up. The added drama seems to make people want the doll more. 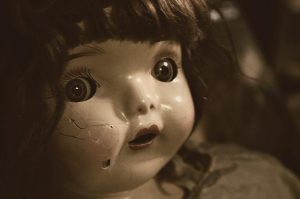 Many places specialize in selling haunted dolls. These websites all have different ways that they “authenticate” the dolls. They have the dolls examined by witches, mediums, or psychics. They also use ghost hunting tools like electronic voice recorders (EVP) and electromagnetic frequency readers (EMF). Some use an Ouija board to communicate with a spirit inhabiting the doll.

Apparently, there have always been serious haunted doll collectors. The interest in buying them has gone up since Annabelle made her appearance in The Conjuring. I think it’s funny that the story of a possessed, murderous doll has inspired such interest in owning one! Would you own one?