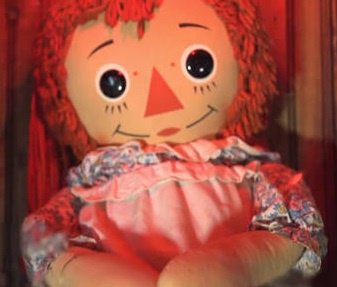 In the world of haunted dolls, Annabelle seems to be the queen. Everyone’s heard of her. She’s had movies written about her and even made an appearance on the tv show Ghost Adventures. That appearance turned into a huge fight between Zak Bagans and the Warren’s son-in-law Tony Spera – Click here to read the gossip.

Annabelle may be the one in the movies, but she’s certainly not the first haunted doll. Some of them date back to the early 1800s.  Sorry Annabelle, but these little ones were here first:

Pupa the Haunted Doll – Pupa belonged to a little Italian girl in the 1920s. She was made to look like her owner. She is made of felt and has human hair. (not her owner’s) Her owner claimed that Pupa was alive. She claimed that they talked to each other her whole life. They traveled together and survived World II. There is a rumor that Pupa even saved her owner’s life, although there is no supporting story. They ultimately moved to America and lived there until the owner died in 2005. 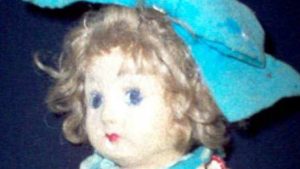 After her owner died, Pupa was put in a glass display case. Pupa was not happy about losing her lifelong best friend. Or about being locked in the case. The family claimed that Pupa would move inside the case. Her arms or legs would change position. They also say that her facial expression has altered slightly over time. Other things in the case were moved around. They said that when they walk by they have heard tapping coming from inside the case. Pupa’s hand would be pressed against the glass when they looked. Sometimes, the glass would be fogged and the words “Pupa Hate” written in the fog.

Pupa supposedly causes an extreme response in anyone that holds her. They freak out if someone tries to take Pupa from them. The person is then left feeling convinced that Pupa is alive. One family member claims that they recorded Pupa walking around the case. But when they tried to put the video on YouTube, all they could see was a film on the lens and the words “Pupa Hate” or “Pupa No” (depending on who’s telling the story) written in it.

No one knows where Pupa is now. Her location is kept a secret.

Joliet the Cursed Doll – Joliet seems to be a collector of souls. At the moment she has four, but as long as the tradition continues – there will be more. Joliet has been passed down through four generations of the same family. I’m not sure why though…legend has it that she is cursed. Not the family heirloom that I would want!

According to the family. The doll is given to pregnant women. At night, they hear one or more of the souls crying through Joliet. They are all boys. The current owner, known only as Anna, says that she knows their names. Joliet was given to Anna’s great-grandmother as a pregnancy gift. Supposedly the “friend” that gave it to her was jealous of her for some reason. Anna’s great-grandmother gave birth to a boy. The baby quickly got sick and only lived for three days.

After that, she gave birth to Anna’s grandmother, who inherited the doll 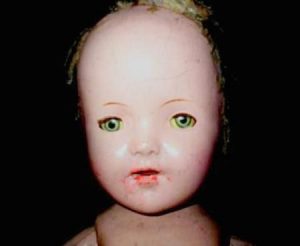 After the death of her son, Anna’s great-grandmother started hearing a baby’s cries coming from the doll. She felt that her son’s soul was trapped inside Joliet. This is what stopped her from getting rid of the doll. She cared for Joliet like it was her child. When Anna’s grandmother grew up she inherited the doll. She knew her bother’s story and had heard him crying. Now it was her job to take care of him.

Ana’s grandmother also had a son and a daughter. Her son only lived three days. Then the family heard both boys crying at night. The tradition continued after that. Joliet was passed to Anna’s mother and then to Anna. Both women had a son and a daughter. Both boys died and could be heard crying from inside the doll. One day Joliet will pass to Anna’s daughter. And then her daughter. They will inherit Joliet knowing they will one day give birth to a son that will die. And the cycle will continue…

Okiku – In 1918, a young man gave his sister a doll. The two-year-old named it Okiku, after herself. It became her favorite toy and she was never without it. Sadly, Okiku died of yellow fever a year later. Because of regulations, Okiku’s parents weren’t able to bury their daughter with her doll. They created an altar to Okiku in their house (a common Japanese tradition to honor the dead), and placed the doll there.

Strange things started happening in the house. The family would hear noises and the lights would flicker. It would intensify near Okiku’s birthday and the anniversary of her death. They also noticed that the doll’s hair had begun to grow. The family started having dreams about Okiku. Sometimes they would wake up and find the doll next to them. The town shamans told them that Okiku’s spirit was trapped in the doll. The family got used to having little Okiku’s spirit around. They were glad to have her near and they took good care of the doll.

The family eventually moved to another town. They didn’t want to take the doll too far from Okiku’s grave, because they thought that her spirit would leave the doll. They asked the local temple to care for her. By this time everyone in town had heard of Okiku. The priests were happy to keep little Okiku’s doll close to her. They built a shrine for her. 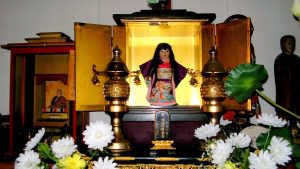 The doll’s hair continued to grow and the priests cut it regularly. They sent samples of it to a lab to be tested. The lab tests showed it was human hair. The priests believe that Okiku is getting stronger. Her hair grows faster and wilder. The priests have started dreaming about her. Visitors to her shrine say it happens to them too. They also say that the doll’s mouth is slowly beginning to open and if you look in it – you can see baby teeth starting to come in.

Renesmee – (I saw this and couldn’t help myself!) Have you seen Twilight: Breaking Dawn Part II? If you haven’t, let me introduce you to Renesmee. She’s the daughter of Edward and Bella – a vampire and a human. She ages at an incredibly rapid rate. An animatronic doll of her as a baby was made. Now, I know absolutely nothing about animatronics – but come the hell on guys – you really phoned this one in! Renesmee is creepy as fuck! The cast called her “Chuckesmee”…she’s that bad. The doll was so bad that they didn’t use her in the movie.

Renesmee now lives in a museum in Forks, Washington as part of the Twilight Forever Collection. And rumor has it that she’s haunted. First of all – she moves – but isn’t being controlled. The staff says that they find her in different positions in her display case. Her white socks are dirty, which people say is because she walks around. My favorite thing of all is that she’s slowly melting! I can’t wait to see what she looks like in the future.

I hope you enjoyed hearing about some of our new friends.