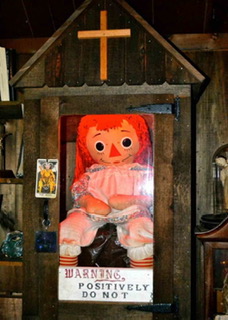 In 1970, a young nursing student named Donna received a Raggedy Ann doll as a gift from her mother. Donna and her roommate Angie loved the doll, so Donna kept it by her bed in their apartment. Shortly after Donna was given the doll, the two women began to experience some strange occurrences with the doll. At first, they noticed little, odd things. Sometimes when Donna came home she would find the doll sitting in a different position than she had left it. A few times, she had placed the doll on the couch, but later came home to find it back on her bed. The doll would move around the apartment when the women weren’t there. Things escalated a bit when they began to find pieces of parchment paper around the apartment with messages such as “Help me,” “Help us,” and “Help Lou.” The doll continued to move around the apartment and even began dripping “blood”.

Donna and Angie had a friend named Lou who never liked the doll. He had always thought that the doll was evil. Lou woke up once to the doll strangling him and the encounter even left deep scratches on him. At this point, Donna and Angie decided to hire a medium to figure out what was going on with the doll. The activity had now become violent and they were concerned about the “blood” and the parchment paper messages. The medium told them that the spirit of a seven-year-old girl named Annabelle Higgins was in their apartment. Annabelle had allegedly died on the grounds of the apartment complex before it became the complex. The medium told the women that Annabelle had become comfortable around them and wanted to stay and be loved by them forever. Donna and Angie then made the mistake of inviting Annabelle to stay inside of the doll. After this, the activity escalated.

This is when Ed and Lorraine Warren were called in. The Warrens warned Donna and Angie that the spirit of a seven-year-old girl didn’t inhabit the doll, but rather the doll was “manipulated by an inhuman presence” that disguised itself as an innocent child spirit to trick the women in the hopes that it could possess a human host. They then had Father Cooke exorcise the apartment and the Warrens took the doll home with them in order to protect the two women. Since Ed and Lorraine were experienced with demons, it was safer for them to have the doll than Donna and Angie.

After narrowly avoiding death on the car ride home with the doll, Ed and Lorraine arrived at their home with the doll. Ed even put it in a chair next to his desk. The Warrens experienced similar experiences to Donna and Angie. Annabelle would move throughout the house and would even levitate in the chair. To minimize the activity and keep everyone safe, they built a special case to keep the doll in, and she remains there to this day, even after both Ed and Lorraine have passed.

In 2013, the world was introduced to a different version of Annabelle in the opening scene of The Conjuring. In real life, Annabelle was a Raggedy Ann doll, but in the film, she was an old, porcelain doll. Annabelle later got her own movie series, Annabelle, that reinterpreted the story of Annabelle and served as a prequel to the Conjuring movies.