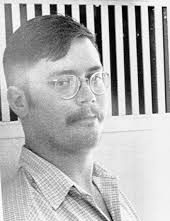 Okay, we all know that hitchhiking isn’t safe.   Even worse is getting into a strange man’s car when girls are disappearing and body parts are turning up all over. Unfortunately,  that’s exactly what was happening in California in the early 1970s.  Times were different back then, and hitching a ride was a common occurrence.  And after years of pent up anger and frustration, (blamed on Mommy, of course) that’s when The Co-Ed Killer started hunting.

When I was doing my research for this article (not trusting my memory to get the specifics right) I learned a new word: irrumatio.  It means a man forcing his penis into someone’s mouth.  This is what Ed Kemper did to the decapitated heads of his victims. That’s something I could have happily gone my entire life without knowing!   After Ed started working with the Department of Transportation, He was either living with a roommate, or with his mother, even though the fighting between them and verbal abuse continued and even escalated.  He once said “My mother and I started right in on horrendous battles, just horrible battles, violent and vicious. I’ve never been in such a vicious verbal battle with anyone. It would go to fists with a man but this was my mother and I couldn’t stand the thought of my mother and I doing these things. She insisted on it and just over stupid things. I remember one roof-raiser was over whether I should have my teeth cleaned”. After an accident on his motorcycle, Ed got a settlement and used some of it to buy a Ford Galaxie.  His mother had a job at the University of California, Santa Cruz. He started going to the college and picking up girls looking for rides.  At first, he would just take them home.  He has said “One side of me said ‘I’d like to talk to her, date her’.  The other side of me said ‘I wonder what her head would look like on a stick’.”  The urge to finally got too strong to resist and his killing spree began.   Then, on May 7, 1972, he picked Mary Anne Pesce and Anita Luchessa, both 18.  They never made it home.  He killed both of them and put the bodies in the trunk.  He took them home and cut off their heads.  He had sex with their bodies and with their severed heads.  He finally dismembered them and took their body parts and heads out and disposed of them in different locations.

On September 14, he picked up a 15-year-old named Alice Koo hitchhiking to dance class.  He got out of his car at one point and accidentally locked his keys and gun in the car with her.  He could be so charming when he wanted to that he actually talked her into letting him back in. Then he raped her and choked her to death. After putting her body in the trunk, he went to a bar to have a couple of drinks.  He took her home, had sex with her body, then dismembered her and got rid of her body parts. He was getting better at the killings.  He has said that when he picked the girls up he would lean over and pretend to make sure their door was closed all the way and would place a chapstick in the door latch to keep it from opening.

He picked up 18-year-old Cindy Schall on January 7, 1973.  He took her to the woods and shot her.  He kept her in his closet overnight, had sex with the body, and cut her head off in the bathtub. He kept her head a few days, removed the bullet,  and then buried it outside facing up under his mother’s window because “she always wanted people to look up to her”.

On  February 5 he picked up 23-year-old Rosalind Thorpe and her friend, 20-year-old Allison Liu after a big fight with his mother. He shot them both, took them home, and cut their heads off right outside in his car.  Then he took their bodies inside to have sex with them,  them up, took the bullets out, and disposed of the pieces the next day. Thankfully, this was the end of his killing innocent young girls!  He finally had the realization that he had to kill his mother “or more girls were going to die”

On April 20, 1973, Ed heard his mom get home from a party.  After she was in bed, he went to her room and she said: “I suppose you’re going to want to sit up and talk all night”.  He said no and went back to his room.  Her comment was apparently the straw that broke the camel’s back and Ed decided that was the night he had to kill her.   After she fell asleep he beat her to death with a hammer and slit her throat.  He cut her head off and had sex with it.  He put it on a shelf, said he screamed at it for an hour, threw darts at it, and smashed her face in.  He took the head into the kitchen, cut out the tongue and larynx, and threw them in the garbage disposal.  The larynx wouldn’t go down the disposal so he threw it in the garbage.  He has said, “that seemed appropriate, as much as she’d bitched and screamed at me over so many years”.   Finally, he put her body in a closet.

He went out for a drink, and when he got home he called his mother’s best friend and invited her over for dinner.  When she got there he choked her till her neck broke.  He said he wanted to create a cover story that the women had gone away.  He put her body in the closet with his mother, packed guns and ammo into his car and drove away.  He left a note for the cops on the door that said “ Appx. 5:15 A.M.  Saturday.  No need for her to suffer any more at the hands of this horrible “murderous Butcher”.  It was quick—asleep—the way I wanted it. Not sloppy and incomplete, gents. Just a “lack of time”. I got things to do!

He drove for three days straight, popping caffeine pills and listening to the radio, waiting for news of the murders.  He drove as far as Pueblo, Colorado.  He still hadn’t heard anything on the news,  pulled up to a payphone and called the California police department to turn himself in. They didn’t believe him, so he called back, asked for a cop that he knew, and told him everything.  He gave them his home address and told them what he had done.  Then he waited in the phone booth for the police to pick him up.  He was asked once why he turned himself in, and he said “The original purpose was gone. It wasn’t serving any physical or real or emotional purpose. It was just a pure waste of time.  Emotionally, I couldn’t handle it much longer. Toward the end there, I started feeling the folly of the whole damn thing, and at the point of near exhaustion, near collapse, I just said to hell with it and called it all off”.

He was indicted on May 7, 1973, on 8 counts of first-degree murder. His lawyers pled not guilty by reason of insanity, of course.  However, after 2 suicide attempts, and examinations by several psychiatrists, he was found legally sane.   On November 8 he was found guilty on all charges.  He asked for the death penalty, but was given seven years to life in prison on all counts.  He was put in the California Mental Facility, where he still is today.