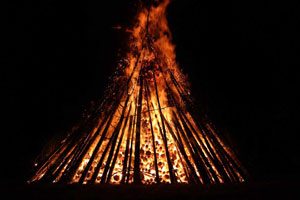 Halloween as we know it is a bastardized version of the ancient Celtic holiday Samhain (but pronounce it “sow-en”).  Samhain means “summer’s end”. It is the end of the harvest and the beginning of the long, dark time of year.  The Feast of Samhain is on November 1 but starts at sunset on October 31. The last of the harvest is gathered and livestock is slaughtered to prepare their winter stores.  During the day on October 31st, the fires within the home are extinguished. Often, families do a deep cleaning to start the winter with fresh and clean household items. Before the festival began, they would put out the fires in their hearth.

At sunset on October 31, clans or local villages began the formal ceremonies of Samhain by lighting a giant bonfire. These sacred fires were a big part of the cleansing of the old year and a method to prepare for the coming new year.  People would gather around the fire to burn crops and animals as sacrifices to the Old Gods.  When the festival was over, they would light a log from the sacred bonfire and use it to restart the fires that would heat their house for the winter. During the celebration, they would wear costumes made from animal skins and dance around the bonfire. Many of these dances told stories or played out the cycles of life and death or commemorated the cycle of Wheel of Life.

On Samhain, the veil between the living and the Otherworld thins, and spirits of deceased ancestors are allowed to cross over.  They were welcomed and honored by their families. The Druids believed that these spirits could help them prophesize about the coming year, and people would try to tell each other’s fortunes. Mischievous spirits also sometimes crossed over, looking to cause trouble or harm. The costumes and animal skins were worn to hide from these spirits. At the end of the night, people would leave food outside their homes to appease the spirits and keep away.

Around 43 A.D., the Romans conquered the Celts.  Two of their holidays were combined with Samhain.  Feralia was a day in late October when the Romans honored the dead. The second was a day to honor Pomona, the Roman goddess of fruit and trees.  The Christians then gained control and wanted to convert the pagans.  One of the things they did was make the Christian holidays coincide with, and be similar to, the pagan ones. They made November 1st  All Saints Day and November 2nd All Souls Day. They started celebrating by dressing as saints and angels and by lighting bonfires.  They began calling October 31st  All Hallows Eve, which eventually became Halloween.

For the modern Pagan, it is the Witches New Year! It’s time to reflect on the last year and think about the year to come.  It’s the time to honor the Crone Goddesses, such as Hecate, Cerridwen, Elli, and Lilith. It’s also a great time to do divination. Time to deal out those tarot cards, cast your runes, and roll them bones! Let’s get ready witches, this year Halloween is on a Saturday and there is going to be a full blue moon! So get out your besoms and pointy hats and charge up those crystals. And while you’re out performing your ritual, take a look at the sky around midnight – you might just see my flying past on my broomstick!

As people from Europe came to America, they brought their Halloween traditions with them.  Eventually, Americans adopted the holiday, added a spooky, scary twist, and my favorite day of the year was born!!!