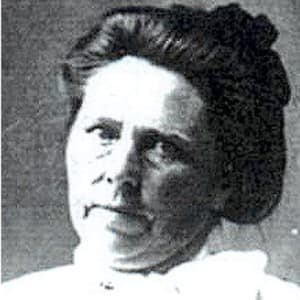 Belle immigrated to the US from Norway in 1881, hoping to live a wealthy life. In 1884 she married a man named Mads Sorensen.  Soon after they got married, their store and their house burned down. They got the insurance money for both of them.  Not long after the fires, her husband died of heart failure and she got more insurance money. Her husband’s family was suspicious and wanted an investigation, but nothing turned up.  Belle also had two children who died when they were babies, and she was able to collect insurance money on them too. She moved to La Porte, Indiana in 1902 and bought a farm with the insurance money.

After she moved to La Porte, she married Peter Gunness.  Again, he died shortly after they got married.  How, you ask?  Well according to the grieving widow, a cast-iron sausage grinder fell off the stove and got him right between the eyes while he was reaching for his shoe! The police actually believed her, and soon more insurance money ended up in her pocket.  Apparently, by this time she learned to enjoy the killing and the thrill of getting away with it.  That’s when her murdering spree began.

Belle wasn’t exactly what men would call a catch. She had false teeth, was almost 300 pounds, and built so muscular that people said she could have been a man. So she decided to take out personal ads.

“Personal: Comely widow, who owns a large farm in one of the finest districts in La Porte County, Ind., desires to make the acquaintance of gentleman equally well provided with views of joining fortunes. No replies by letter considered unless sender is willing to follow answer with personal visit.”

Pretty sexy, huh?  What man in his right mind wouldn’t answer that ad? They did answer, grabbed their money, and headed over to Belle’s farm. And they were never seen again.  Belle continued to put personal ads in Norwegian newspapers in the Midwest, and the victims kept on coming.  For six years she got away with the murders of men who answered her ads and men she hired to work her farm.  Then, in April of 1908, Belle’s farmhouse burned to the ground and her luck ran out…maybe.

After the fire, the bodies of three kids and a woman were found in the ashes.  The children were identified as Belle’s, but the woman had been decapitated and her head was missing.  The body was never positively identified, but everyone assumed it was Belle.  The police arrested a man named Ray Lamphere for arson and murder. Lamphere was a hired hand on Belle’s farm, and also her on and off lover.

Before the fire, Belle had gone to her lawyer to draw up a will. She said she needed it because she was afraid Lamphere was going to burn down her farm and kill her.  Then she went to the store and supposedly bought toys, cream puffs, and five gallons of kerosene before she went home. The next day the farm burned down.  You would think that with Lamphere taken into custody that would be the end of it. But wait! There’s more…

A man from South Dakota named Asle Helgelien read about the fire and went to the sheriff in La Porte looking for his brother, Andrew.  Andrew had answered an ad in a Scandinavian newspaper that said “Wanted — a woman who owns a beautifully located and valuable farm in first class condition, wants a good and reliable man as partner in the same.”  After he answered, Belle started sending him love letters. She promised to be his if he helped pay off her mortgage and said things like “My heart beats in wild rapture for you, My Andrew. I love you. Come prepared to stay forever.”  So Andrew took all his money, packed his bags, and headed over to Belle’s.  He was never heard from again.

Helgelien told the police that he thought Belle had killed his brother for money and used the fire to cover it up. He told the police that he had tried to get in touch with his brother before the fire, and Belle told him that Andrew went to Norway. The police didn’t believe his theory, until the cleanup after the fire started turning up body parts.  The heads, arms, and legs were cut off of the victims.  They had been put into sacks, covered in lime, and buried all over the property. Andrew Helgelien’s remains were found among them.

After that, Ray Lamphere told police that Belle would get the men into her bedroom, chloroform them, and chop them up with an ax. He said that he had set the fire, but the woman’s body that they found wasn’t Belle, that she took all her money and ran away. He said the dead woman (whose body was much smaller than Belle), was Belle’s housekeeper.  Even though the body was never proved to be hers, Belle was officially pronounced dead.

Belle has become a legend.  For many years after that, people claimed that they spotted  “Lady Bluebeard” all over the country. The Black Road Brewing Company in Indianapolis, Indiana created a dark beer called Belle Gunness Stout, and there have even been several songs written about her.