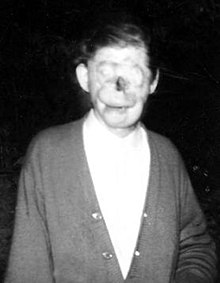 There’s a legend in Beaver County, Pennsylvania about a creature they call The Green Man. Now as any pagan will tell you – the Green Man is a nature spirit. He represents life, nature, and rebirth. That’s not who we’re talking about.  As with most local legends, there are many different stories about who, what, and why the Green Man exists. They call him Charlie No-Face. Sadly the story that isn’t told very often, is the fact that he was a real person.

In reality, Charlie No-Face was a man named Raymond Robinson. When he was a boy, he had a horrible accident while playing on a railroad bridge with his friends. They saw a bird’s nest on top of the bridge, and when none of the other kids would do it, Raymond decided to climb up to see if there were any eggs in it. He was electrocuted by some transmission lines at the top (another boy had previously done the same thing and was killed, sadly). Raymond lived but was burned so bad that he lost his eyes, an ear, his nose, and one arm.

After the accident, Raymond learned how to weave, and made things like belts and wallets to make some money. Although his friends and neighbors were nice to him, strangers that saw him were either freaked out or just stared at him. So he spent his days hiding in his house and went for walks by the road after it got dark. Unfortunately for Raymond, he couldn’t prevent people from driving around and seeing him. Eventually, a rumor started to spread about some horrible monster that walks the road at night.

People started driving up and down Route 351 and the Piney Fork Tunnel, hoping to see Charlie No-Face. Some people actually got brave and spoke to him, and discovered that he was simply a nice guy who had a terrible childhood accident. He would stop and talk to people, and some would share their cigarettes and beer with him. Unfortunately, not everyone was nice. He would get in people’s cars and they’d drive off and drop him in the middle of nowhere, and he was beaten up more than once. Some people are just cruel.

As he got older he didn’t walk as much and eventually moved into a nursing home. Charlie died in 1985. Charlie is now nothing but some kind of “ghost” that haunts the road he used to walk every night. There’s also a legend that he’s been seen hanging around a train tunnel in South Park, Pennsylvania. A man who had a tragic childhood accident has become an urban legend.

They say he’s got glowing eyes, green skin, and a horrible face. The place where his nose was got infected frequently during his life, and would sometimes look a little green. The stories about a man with no face walking along the road were exaggerated over time, and then the descriptions of him got worse. The only thing people agree on is that he walks along the road.

It’s like a game of telephone….the more a story is told, the more it changes. People said that if you saw him it would make your car stop working, and then he would come after you. Charlie No-Face has been described as many things, including:

No one knows where the name Charlie No-Face came from. But just remember that he had a name, and it was Raymond.