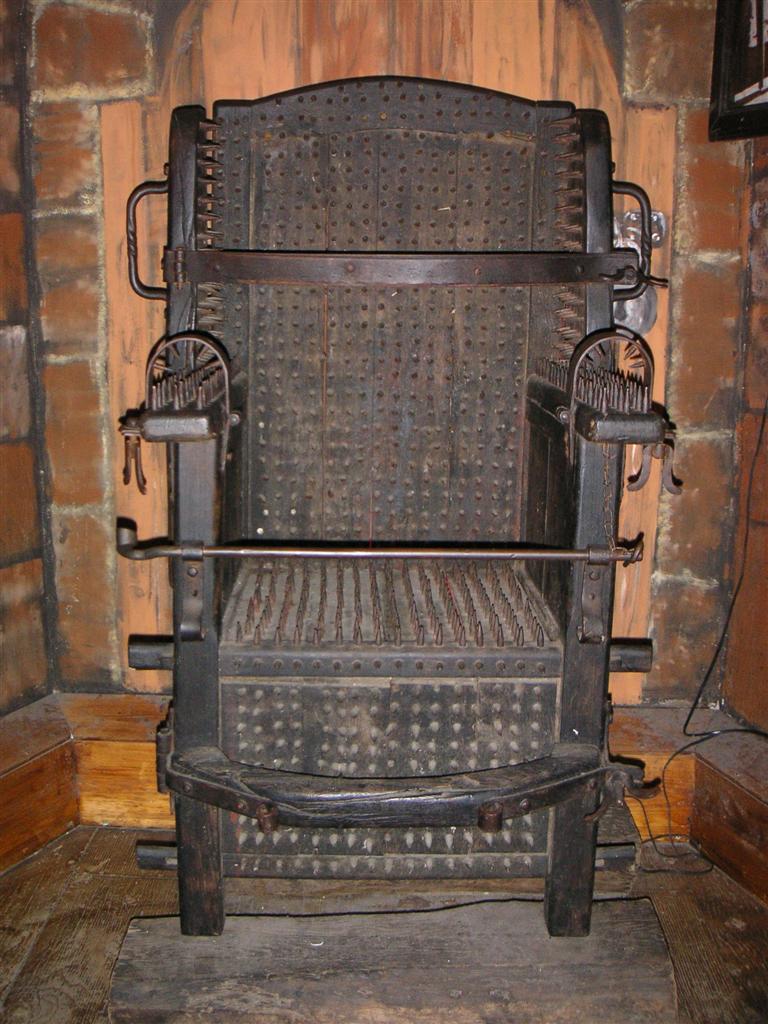 Here’s a lovely piece of furniture that is sure to look good on anyone’s deck or patio.  It’s a great conversation starter or designated seat for an in-law.  It was used in Medieval Times until around the late 1800s. It has a few different names, depending on what part of the world it was used in:  The Chinese Torture Chair, The Torture Chair, The Judas Chair, or The Chair of Torture.  Just don’t buy it at Ikea…it will take you forever to put together!!

The chair was used to get someone to confess something.  It was often used as psychological torture.  The victim would be tied to a chair and forced to watch someone being tortured in it, knowing that if they didn’t confess, they were next.  Just seeing it happen to someone was often enough to make someone confess, innocent or not!  If it was me, I’d even confess to the Manson murders….and I wasn’t alive then.

“The victim was seated and sustained by the front bar of the chair, then by another vertical bar, while two rings fastened the ankles below; in the upper portion there was a collar for the neck, and then another transverse bar passing through the first, and fitted at each extremity with a ring holding the wrists. Underneath the seat was a stove.”

No matter what part of the world it was used in, the torture was pretty much the same:

Death in the Iron Chair could take anywhere from days to weeks.  The coals would cook the victim slowly.  As long as the spikes were still in their body, it stopped them from bleeding too much.  Once the victim was pulled off the spikes, they would bleed to death if they had gone in too deep.  (Never pull out anything that’s been impaled in a person!).  If the victim didn’t die right after being taken out of the chair, they would usually develop an infection that would eventually kill them.