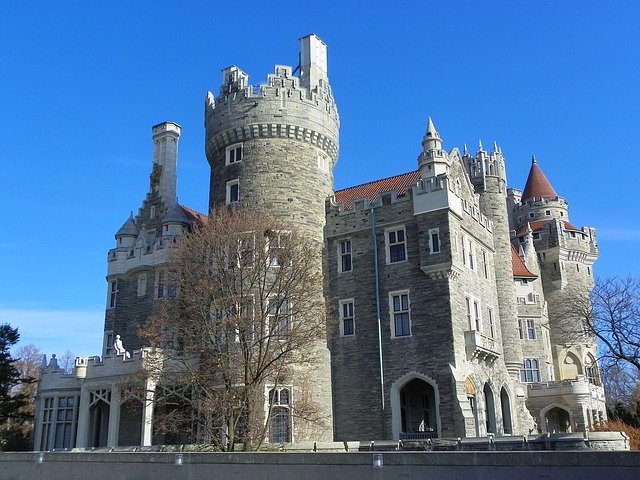 The Ghosts of Casa Loma

Casa Loma is an absolutely stunning castle in Toronto, Canada.  I was there several years ago, so I speak from experience. The castle itself is amazing! Clean and beautifully preserved. We wandered around for hours in awe of everything, trying very hard to resist the impulse to touch everything that had a “do not touch” sign on it.  The gardens outside were some of the most beautiful I’ve ever seen.  There’s a tunnel that runs underneath the castle and takes you to the horse stables and the barn. Being claustrophobic, I’m proud to say that I made it through without freaking out! It’s damp, dirty, and spooky down there. Exactly how an underground tunnel should be!

Also…Casa Loma is supposed to be haunted. In 1914, a man named Major General Sir Henry Pellatt had the castle built because he wanted it to be a place the English royalty would stay in when they came to Canada. It took three years and $3.5 million dollars. Unfortunately for Sir Henry, he couldn’t afford it and had to sell it nine years later. After that, it was a hotel and then a nightclub. After the nightclub, it was empty and falling apart until the city of Toronto bought it, restored it, and turned it into a tourist attraction.

There have been reports by both staff and guests about the rumored hauntings. There is a ghost of a woman in a white dress that haunts the second floor and sometimes the basement. The White Lady is thought to have been a maid that worked there in the 1900s. There’s also a male ghost that is believed to be Sir Henry.  A boy saw a man in a second-floor window, even though that floor was closed off.  A staff member asked the boy what the ma looked like and the boy pointed to a picture of Sir Henry and asked why the man was “so mad”. Lady Mary has also been spotted floating around.  People have reported hearing children, even though there weren’t any around, and there have also been reports of a man taking care of the plants in the conservatory.

The best spot for a ghost is, of course, the tunnel.  The tunnel’s ghost is supposedly a friend of Sir Henry that was taking care of the horses. This ghost is kind of a pain in the ass, and is nicknamed Mr. Happy! People have said that their hair was pulled and felt someone grabbing them. Ghost hunters have recordings of him talking to people, and some visitors have heard him sighing. Sadly, all I experienced in the tunnel were spiders.

Casa Loma also has a secret. During WW2. the British used it as a secret military laboratory where they kept their ASDIC (sonar). The Germans used U-boats during the war and this device detected them before they reached the shore. The castle was still open to tourists, so they put us a sign that said “Construction in Progress – Sorry for the inconvenience”.

I can’t say whether or not the castle is haunted, but it looks like it should be.  And we did see a handprint on a dusty couch in a roped-off section of one of the rooms, so who knows?  Either way, if you’re ever in Toronto, it’s definitely worth a visit. Fun fact…Casa Loma is Spanish for Hill House.  Just saying.