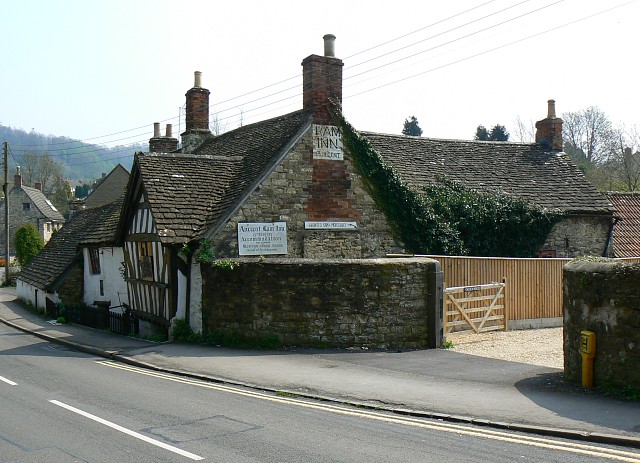 Who wants to come to England with me? Let’s all go to the Ancient Ram Inn, in a village called Wotton-Under-Edge. They say that it’s the most haunted place in England, which is perfect for us, right? It’s absolutely adorable and the grounds are beautiful. It was built in 1145 as a home for the workers who were building St. Mary’s Church not far from there.

Here’s the problem with that: the property is built on an ancient Pagan burial ground. It sits on the ley lines that connect the land to Stonehenge. In the Pagan tradition, ley lines are lines that carry magical energy. Streams on the property had to be diverted during construction. All ancient religions have deities that are connected to bodies of water. Legend has it that when the ground was disturbed, it opened a portal to the energies used in the Pagan rituals. It’s also said that a witch was burned at the stake on the property.

After the church was done, a priest lived in the building for a time. After that, it was turned into an inn. Eventually, the building was going to be torn down, but a man named John Humphries bought it in 1968. He planned on making it his private residence. That’s when the ghosts came out to play.

He said that early on,  something grabbed him while he was asleep and dragged him across the room. Humphries found human remains with daggers in their skulls under a staircase. He has claimed that he was attacked by spirits many times over the years. He also claims to have had many non-consensual encounters with a succubus. His wife left him and took their kids with her. He lived there until he died in 2017.

I mentioned already that it is considered one of the most haunted places in England. So let’s talk about the ghosts, shall we?

Legend has it that during the 1500s, a woman accused of being a witch was hiding on the property. She was scheduled to be tried but escaped. Unfortunately, she was captured and burned at the stake on the property. The room she was hiding in is called “The Witch Room”. Humphries claimed that the witch’s spirit is haunting the room, as well as the ghost of a black cat ( Possibly the ghost of her familiar, or maybe the witch herself).

They also have a room called “The Bishop’s Inn”. This is supposedly the worst room in the building. During the building’s original use as an inn, this room was used specifically for bishops. Though people say there are a lot of ghosts haunting the room and not just bishops. There have been reports of a British knight called a cavalier, monks, nuns, a dog, and a woman hanging from the ceiling. Kind of makes me wonder what those bishops were up to!

There have also been reports of either an incubus or succubus, depending on the gender of the complaining guest (Both creatures are basically sex demons). During work on one of the chimneys, evidence of black magic rituals was found. This is what the incubus and succubus are blamed on. Supposedly a former Bishop of Gloucester tried to perform an exorcism in the room. He was quoted as calling it “the most evil place I have ever had the misfortune to visit”

The kitchen is apparently haunted too. According to a couple of diviners (someone that can find water), there used to be a well in the center. They have also sensed an evil presence and two bodies in the well. Avoid the kitchen, ladies! They say it makes women feel dizzy.

In “The Weavers Attic”, mediums have said there is the ghost of a former landlady and the ghost of a highwayman (someone that robbed travelers). In “The Beaufort Room”, people have seen a glowing mist, black cat, and dancing, bright lights. And a Roman centurion has been seen in the grounds. That one is extra weird!

The Ancient Ram Inn sounds like a ghost hunter’s wet dream! If I ever get the chance, I would love to check it out for myself. In the meantime, check out this article on Ex Utopia, to read about a day spent at the Ancient Ram Inn.