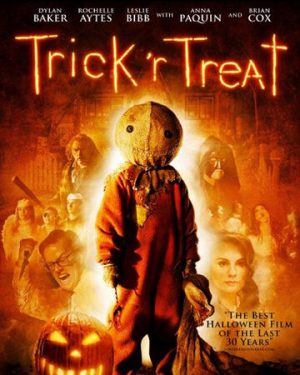 Hopefully, we’ll all be hearing a lot of kids saying trick or treat this year. The big day is coming and I’m in the holiday spirit!  Ok – I’m in a Halloween mood all year, but that’s not important right now.  Most likely you’ve rewatched all the Halloween movies and are impatiently waiting for Halloween Kills. Soon my friends, soon. In the meantime – don’t forget to add Trick ‘r Treat to your list of Halloween movies to rewatch! It’s definitely not scary, but it’s a good time.

I’ve always enjoyed horror anthologies. The stories in Trick ‘r Treat are woven together in a roundabout way. The stories are told out of order, but I liked how director Michael Dougherty tied them together.  He manages to take Halloween urban legends, superstitions, and lore, and combine them into five stories. And instead of a traditional slasher – we have Sam. The defender of Halloween.

The movie doesn’t play out like a traditional anthology. It doesn’t start out at the beginning, but it wraps around to it later on. Each storyline addresses something related to Halloween. We get monsters, Samhain, superstitions, murder, and an old urban legend. It all takes place on one Halloween night. It’s a nondescript town, but I applaud the way they celebrate Halloween. And if you’re not celebrating properly – Sam will know!

Sam is adorable, although I don’t know if he was meant to be! We don’t learn his backstory, but I think that he’s the spirit of Halloween. The theory is that Sam is short for Samhain (the Pagan holiday that Halloween is based on). He’s not a slasher that just goes around killing for no reason. People like us have nothing to worry about because we love Halloween. However – if you’re a Halloween hater, or don’t celebrate properly – Sam is coming for you!

Don’t underestimate him because of his size. He looks cute and harmless, but if you made him mad, you’re gonna pay. He’s a powerful little guy! It doesn’t matter how big and strong you are – he’s gonna take you down. He can beat the shit out of a grown man and he’s incredibly fast. And if it looks like you killed him – don’t be so sure. You know how it works. Those supernatural creatures are pretty resilient.

Lucky for us, Sam makes an appearance in all the stories. We meet a woman who needs a little more Halloween spirit, a teacher that really hates kids, a bunch of teenage girls looking to have a good time, some crappy teenagers, and an old man with a secret. The movie has a few big names in it. Anna Paquin (True Blood), Dylan Baker (you’ll recognize him from a ton of different things), and Brian Cox (another face that pops up everywhere).

Trick ‘r Treat didn’t get released until two years after its planned release date. The movie was based on an animated short directed by Dougherty called Season’s Greetings.  That’s where we met Sam. Trick ‘r Treat’s original release date was October 2007. Warner Bros, changed their minds and pulled it, but didn’t explain why.  There was a rumor that the studio was afraid that it couldn’t compete with the release of Saw IV. Another rumor was that Warner Bros. had a problem with a movie that had children being killed. Regardless of the reason, Trick ‘r Treat never made it to theatres and went straight to DVD.

Luckily there were people who saw it in advance screenings and couldn’t stop talking about it. Rumor spread and it soon became a cult favorite. All thanks to people like us!