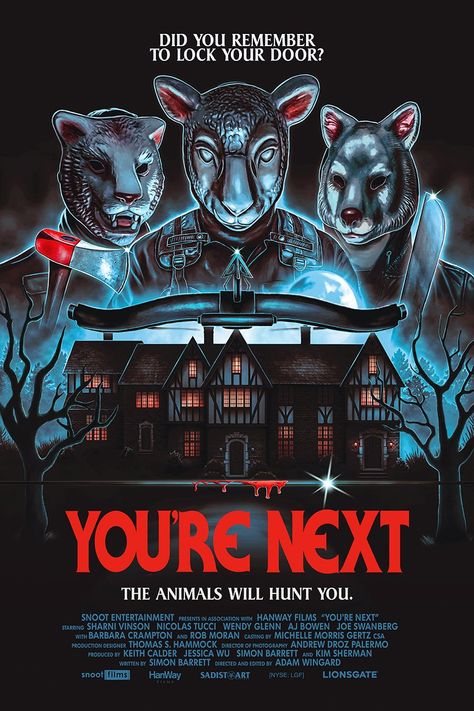 You’re Next is one hell of a ride! I just rewatched it for the first time in a while. I had forgotten how much I liked it.  Director Adam Wingard takes the standard “isolated house in the woods” trope and gives it new life. No teenagers running from a supernatural killer here. This is one family, one night, and one long, hard fight. It’s like The Strangers, but the attackers have a reason for being there.

The movie opens with a couple being murdered. “You’re Next” is written on the wall in blood. This sets the tone for the rest of the movie. The unfortunate couple lives next door to the Davidsons.

The Davisons invite their grown children (and their significant others) to celebrate their 25th anniversary. We meet spoiled little rich girl Aimee and her boyfriend Tariq, son Drake and his wife Kelly, son Crispian and his girlfriend Erin, and son Felix and his girlfriend Zee. The family is meeting at the Davisons’ very isolated vacation home. The house is huge, gorgeous, and far enough away from the neighbors to have lots of privacy. The neighbors, unfortunately, are dead.

It’s obvious that the Davisons are a very dysfunctional family and the siblings do not get along. During the extremely awkward, passive-aggressive dinner, someone attacks the family through a window with a crossbow. We soon realize that there are three attackers wearing animal masks that intend to kill everyone. The family can’t escape, and their phones are jammed. Unfortunately for the attackers, Erin isn’t ready to die, and fights back hard!  The tables turn and the attackers become targets themselves.

Sharni Vinson is fantastic as Erin.  Sorry Sarah Connor, but this kid can kick some serious ass! Erin was raised as a survivalist and knows exactly what to do. She’s the only character that I liked. It was good to finally see a character that doesn’t run into the attic or trip over nothing every five seconds. She takes charge of the situation and tries her best to stop the attackers and save everyone. A person with a brain in a horror movie is a refreshing change.

There are no ghosts or curses here, just three men hired to do a job. We do eventually learn the reason for the killing spree and it’s a nice twist.  The killers (simply called Fox Mask, Sheep Mask, and Tiger Mask) are intent on finishing their job. The killing is incredibly creative! Fox, Sheep, and Tiger came prepared, and Erin is busy scrounging around for anything she can use as a weapon. It’s very brutal and messy. And occasionally funny – Because who doesn’t like to laugh at a good murder? It will satisfy everyone’s appetite for blood and gore.  If you’re easily upset by violence do not watch this!

Wingard sets the stage quite nicely, starting with the house. It’s huge! Too many rooms, windows, and hallways. No one can be sure where the killers will turn up next.  A masked killer is a time-honored trope that is always creepy! The soundtrack really works well to keep you pumped and involved.

Adam Wingard gives us a new kind of home invasion movie. You spend the movie thinking you know and then changing your mind. Wingard’s fresh approach to the home invasion is one of the things that makes it so good.