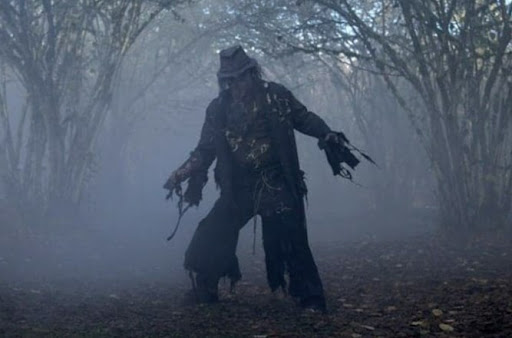 ‘Tis the season to be…something. What you’re gonna be depends on where you live. Here in America, we’re supposed to be jolly. But if you’re reading this – you’re probably sad that spooky season is over.  Even though the Halloween decorations have been replaced by Christmas trees, menorahs, and all the other trapping of December holidays, I’m here to inject a little scary into your holiday.

We’ve all heard the legend of Krampus, but in the border region of Alsace Lorraine on the border of France – the children worry about getting a visit from Hans Trapp, the Christmas Scarecrow. Hans Tropp is thought to be based on the real-life Hans Von Trotha. 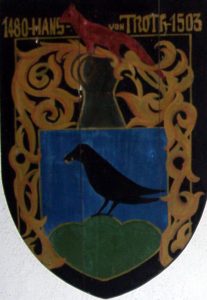 People started to say that Von Trotha was practicing the occult and worshipping Satan.  The Abbott complained to the Pope, who requested that Von Trotha come to Rome, but Von Trotha refused. He was excommunicated in 1941 and banished from Alsace. History has him spending the rest of his life in his palace in Berwarstein. 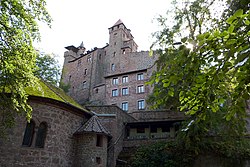 Legend has it that after his banishment, he went to Bavaria and built himself a cabin in the mountains.  The rumor is that he spent his days thinking about his revenge. That he still worshipped Satan.  They say he started wondering what human flesh would taste like. He was obsessed with biting a person. He disguised himself as a scarecrow and went out at night looking for victims.

One day he finally captured a local boy.  They say that after he cooked the boy, he was about to eat and was struck by lightning. It is said that God was upset by his actions and decided to stop him. (although it would have been nice if he got involved before he cooked the kid – just saying).

Over time his name morphed into Hans Trapp and parents started using the legend as a way to get their kids to behave. Children were told that if they didn’t behave, Hans Trapp’s spirit would get them.  Legend has it that his spirit would wander around on Christmas Eve, scaring the kids, thinking about eating them and drooling.

There is another version that refers to him as The Black Knight. They say that he goes around with Santa, and punishes the naughty kids.