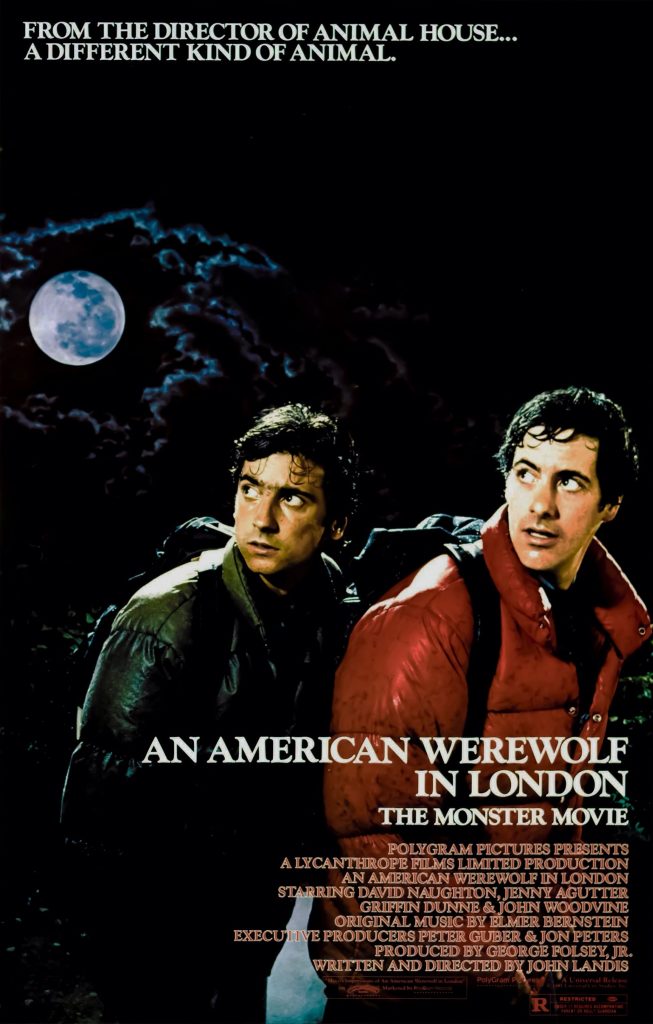 An American Werewolf in London is one of those classic horror movies that stands on its own as something a little different. Both hysterically funny as well as scary as hell, it carves its own path down the lycanthropic trail. If you have never seen it you must, and if you have, you need to watch it with someone who hasn’t. (You know why.) A brief summary for the 14 of you that have not seen it: David Naughton & Griffin Dunne are college buddies David and Jack roaming the English countryside, straying from the road as they were strongly warned not to do. Jack quickly becomes werewolf chow and David is injured. He wakes in a London hospital in the care of nurse Alex Price ( Jenny Agutter in her prime.) Not long after – the corpse of Jack appears warning David that in two days hence, he will become a werewolf and must kill himself to stop the bloodline, allowing Jack and the other victims to finally rest in peace. David fails to heed Jack’s advice, especially as things start to heat up between him and nurse Price. (Can you blame him?) David does become a werewolf, terrorizing London, and slowly comes to terms with his fate. No spoilers here. 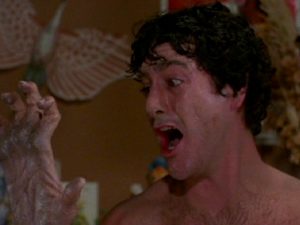 Arrow Video, the sort of fun cousin to the more serious and straight-laced Criterion Collection, released a new transfer of Werewolf in 2019 as both a single disk HD or 4K/HD and a limited edition box set with both versions, a double-sided poster, postcard-sized reproductions of the lobby cards* and a hardcover book.

I purchased the HD disc, but it does not disappoint and looks incredible, with great color and clarity. The film probably looks better than it did when it was initially released, and you can see that little flap of skin on Jack’s neck in all its glory. And that is somewhat of a double-edged sword.

Landis had the cojones to set the first – and really only – transformation scene in a well-lit room. (As opposed to the rather dimly lit, yet slightly more effective transformation of Robert Picardo’s Eddie in The Howling. We can argue this later.) And this, coupled with the really nice new transfer, shows off some of the limitations of Rick Baker’s still stunning effects. Even Landis himself stated that some of the shots “Look rubbery” when he approved the transfer. This is not to take anything away from all of Baker’s work, but I think that as these older movies get better and better transfers, some of the warts that would normally be hidden by film grain or standard definition TV are going to be revealed and we simply have to accept it. I still find the effects more impressive than some of the CGI garbage we see all of the time today, such as when David’s hands begin to change, or once fully wolfed out we see the side view of him and he appears tense and ready to pounce. That’s actually happening on set, not digital bits being manipulated. Along with the great picture, there is the original mono or a DTS-HD 5.1 soundtrack.

If you are anything like me, the special features are the big draw to Arrow discs and there are a lot, many ported over from previous Universal releases going back as far as the early 2000’s DVD. We have a vintage interview with John Landis and a commentary with David Naughton and Griffin Dunne. Also, outtakes, behind-the-scenes footage, and of course trailers and original TV ads- if those are your sort of thing. Arrow also gifted us with many new extras including a second commentary with Paul Davis who is also responsible for the included full-length documentary Beware the Moon: Remembering An American Werewolf in London from 2009.

This doc is fantastic considering he essentially made it with two friends on their own without studio involvement. He interviewed many cast and crew never previously interviewed and you find out things that you may have never known, such as Griffin Dunne was actually the one working the mouth of the puppet of Jack that was used for his final scene. Two more documentaries, one being Mark of the Beast, and The Legacy of the Universal Werewolf are interesting but little more than talking heads. There is a short bit on some of the surviving props, and finally, Arrow as they often do, commissioned new artwork for this edition but if you are a traditionalist you can flip it over and have the classic two-shot of David and Jack looking over their shoulders scared: 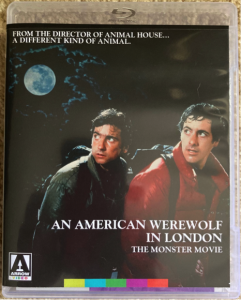 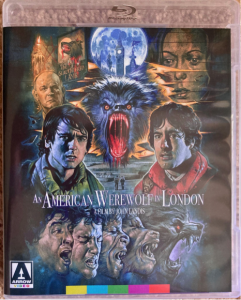 *For you youngsters there used to be displayed in movie theater lobbies with photographs from the current showing or coming soon, usually surrounding the poster, hence the name lobby cards.