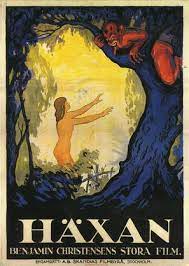 Häxan (Witch) is such a fascinating film! And very much underappreciated. The 1922 silent film is part documentary and part fiction with a little comedy mixed in about the evolution of witchcraft. It’s pretty amazing to watch. It’s a Swedish-Danish film by Danish writer/director Benjamin Christensen  It’s based on the Malleus Maleficarum. It’s weird and kind of artsy, but interesting as fuck! 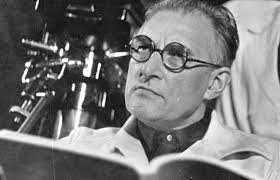 Häxan is divided into seven parts. Each part explores a different evolution of the beliefs and superstitions around witches. It’s almost like taking a class about witches while tripping. There’s no plot. But Benjamin Christensen went full-on into this. It’s obvious that he did thorough research for this film. Häxan was made before the Hayes Code censorship went into effect in 1934. This left Christensen free to use gore, violence, and nudity however he pleased.

This film is visually stunning. The cinematography and effects were pretty impressive for the time. The scenes are tinted either red or blue, red signifying evil, of course. There are historical drawings and paintings overlaid with smoke. He uses stop motion and what I can only describe as wood-cut puppets. There’s a great moving model of the solar system, heaven, and hell. 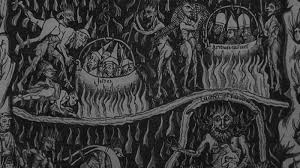 The scenes of hell are fabulous. Christensen uses detailed artwork and points to specific parts. There’s a moving model of hell to show us the demons at work. The scenes are red-tinted with smoke overlays, to add to the evil effects. The demons are torturing the people in hell – biting them and tossing them into the fire. He shows what people then believed – witches at their Sabbath, dancing on crosses, eating corpses, and physically kissing the Devil’s ass.

Part 2 moves to medieval times and its beliefs about witchcraft. The pictures from part 1 transition to small segments involving actors. We meet the Devil, who is hell-bent (pun intended) on seducing women. There is a segment showing Karna the witch’s secret home. She used corpses, animals (like snakes and toads, of course), and other appropriately witchy ingredients to make potions for the villagers. It also shows how the desire for things overrode people’s fear of witches One case in point is a woman that comes to Karna looking for a love potion. 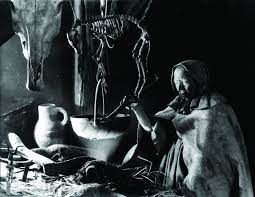 Parts 3 and 4 are the story of an old weaver named Maria who is accused of witchcraft. She is arrested and mercilessly tortured by monks. She confesses to having babies with the Devil, casting spells, and using ointment to fly. Meanwhile, the Devil is churning butter in a way that looks like he’s doing something completely different! (It’s a bit funny actually).  Poor Maria ends up burning at the stake.

Part 5 introduces us to Anna, who’s been accused of being a witch. She’s tortured until she “confesses” to make the pain stop.  Most of the women in the town have already been accused and tortured into “confessions” and naming other witches.

Part 6 moves away from the trials and Christensen shows real devices used to torture witches during the Inquisition. One brave actress lets him try one on her. Some actors have the devices on them as if they’re about to be tortured. He doesn’t show the actual torture but leaves the results to our imagination. 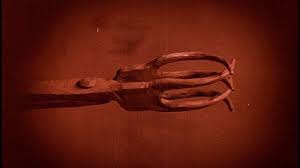 In Part 7, the film ends with Christensen showing how people accused of witchcraft were nothing more than people subjected to baseless accusations because of fear, suspicions, and superstitions. And how people used witchcraft as an explanation for things that they couldn’t understand. The “witches” are finally seen as the innocent victims that they were. 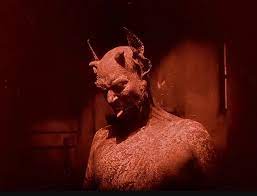 Häxan was released to mixed reviews. It was well-liked by critics. It was banned in several countries. Places that did release it made extreme cuts to it. A Variety review said…”Wonderful though this picture is, it is absolutely unfit for public exhibition”. It was re-released in 1941 with an introduction done by  Christensen. It was released again in 1941 by director Anthony Balch, but it was a shorter version. It was released again in 1968, but completely in black and white. (I don’t recommend it, the black and white ruins it) and with a voice-over by writer William S. Burroughs.

I highly recommend that you watch Häxan, even if silent films aren’t your thing. It’s educational, a little scandalous, humorous, and like nothing that you’ve seen. Appreciate the look for the time period and follow Christensen down into the depths of hell. 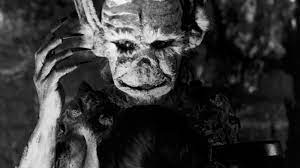