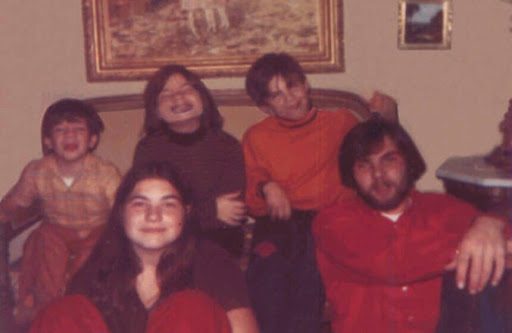 In January 1974 George and Kathy Lutz bought a house in Amityville, NY, and moved in with their three kids. Their realtor had already told them that it was the site of the DeFeo murders. (Click here if you haven’t read Part 1) As you can imagine, they got a great deal on the house. Just to be on the safe side, (you never know, right?) they had a priest come bless the house. In a TV interview on a show called In Search Of (with his face hidden), he said:

“I was blessing the sewing room. “It was cold. It was really cold in there. I’m like, ‘Well, gee, this is peculiar, because it was a lovely day out, and it was winter, yes, but it didn’t account for that kind of coldness. I was also sprinkling holy water, and I heard a rather deep voice behind me saying, ‘GET OUT!’ It seemed so directed toward me that I was really quite startled. I felt a slap at one point on the face. I felt somebody slap me, and there was nobody there.” He didn’t tell the Lutzes what happened. Click the link to watch the interview. https://youtu.be/7W8eS5FXC8E.

It seems that the priest’s blessing didn’t take. After living there for twenty-eight days, the Lutz family packed a few bags, grabbed the family dog, and left. They left most of their belongings there and they never went back. The Lutzes claimed that they were haunted by an evil presence while living in the house. These are their stories (insert Law and Order “dun-dun” here!):

At first, everything seemed fine and the move was easy. The Lutzes had paid an extra $400 to keep the DeFeo’s furniture. Their kids reportedly slept in the beds that the DeFeo kids were murdered in. Minus the blood-soaked mattresses, of course! And it was fine until one day, Kathy felt something that wasn’t there touch her hand. Then two of the rooms started getting swarms of hundreds of flies. The Lutzes would kill them, but they kept coming back. Even while the dead ones were still on the floor.

Then came the green slime. It wasn’t the oozing globs that you saw in the movie. The Lutzes said that they originally thought one of their kids had been trying to make something that had spilled on the floors. Then it happened again while the kids were at school. They couldn’t explain it. The temperature in the house was freezing no matter what they did. Things that the water touched (like their china and the toilets) started turning black. The water in the house was clear. They had contractors come in, but no one could find any explanation. And something black would ooze out of keyholes.

The Lutzes claimed to have nightmares about the DeFeo murders. George said he kept waking up at 3:15 a.m- the exact time of the DeFeo murders. Then one day, Kathy was re-arranging furniture in the basement and found the door to a red room hidden behind a bookcase. She said it had a foul smell and the dog refused to go near it. The room wasn’t shown on the house’s plans. No one could explain it. However, it wasn’t the demonic room in the movie. Just a secret room painted red.

Their daughter had a new imaginary friend named Jodie. Jodie could change shape and size. He could be the size of a stuffed animal one minute, and then grow bigger than the house. She drew pictures of him and she said that people could see Jodie, but only if he wanted them to. One day, George was walking outside. He looked up at her window and saw a shape inside her room.

The Lutzes had been trying to get in touch with the priest that blessed the house but had no luck. They decided to take matters into their own hands. They walked around saying the Lord’s Prayer and telling whatever was in the house to leave. Kathy said that she heard voices saying “will you please stop?”. According to the Lutzes, that’s when things got bad.

George woke Kathy up in the middle of the night in terror. She looked in the mirror and saw that she had turned into an old woman. Her hair had turned white, her face was wrinkled, she was frowning and felt sick. She was back to normal by morning.

They also said that once Kathy levitated off the bed, both of their sons’ beds levitated, the garage door opened and closed on its own, and that a knife on the table suddenly flew off. George became obsessed with the fireplace. He would sit and stare at the flames for hours. They said the front opened and slammed shut repeatedly and windows randomly broke.

They couldn’t take it anymore and decided to leave. They said it was a very hard decision because they felt like the house had a grip on them. They spent their last day packing some clothes and important belongings and went to stay with Kathy’s mom. They had friends of theirs go back for the rest of their things. None of the friends felt any evil presence and nothing happened to them.

The Lutzes spoke with a publisher who introduced them to Jay Anson. They submitted hours of taped recordings of what happened to them in the house. Those recordings became the book The Amityville Horror.

But that’s still not the end of the story! I’m down the rabbit hole now my friends! We’ll have another trip to Amityville coming soon.