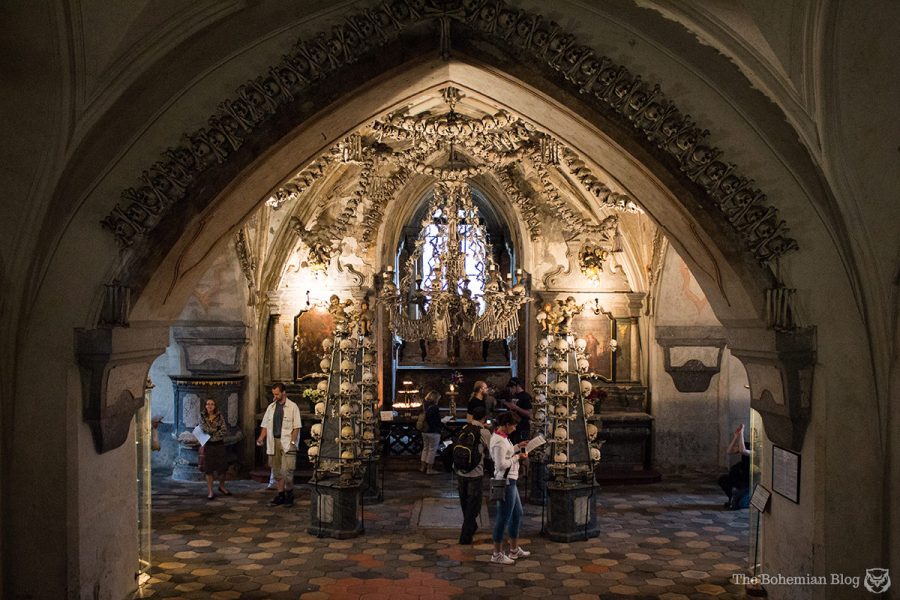 The Creepy Church of Bones

On the grounds near the Sedlac Abbey in the Czech Republic,  is the Cemetery Church of All Saints. Under the church is a chapel called the Sedlac Ossuary, a/k/a The Bone Church. Sometime in the 13th century, an abbot from the monastery went to Israel. He brought back some dirt from Golgatha (where Jesus was crucified). He sprinkled the dirt on the small cemetery by the Abbey. Word spread through the town. Soon everyone wanted to bury their dead in the cemetery with the dirt from the Holy Land.

Due to the Black Death and several battles in the area during the 14th century, the cemetery was overflowing with bodies. It was so crowded that an ossuary (place to store dead bodies) had to be built. One of the monks, who was half-blind, had to exhume the bodies and stack them in the ossuary. By around 1703, the front wall of the ossuary started to lean forward. A new front entrance was built to support it. Then in 1870, a woodcarver named Frantisek Rint was hired to organize the bones.

Rint did more than just organize them. They became the architecture. Rint bleached bones and used them to create art. Rint was hired by the Schwarzenberg family. They were an aristocratic family, and he created their coat-of-arms out of bones. There are enormous piles of bones neatly stacked in each corner. There’s a chandelier of bones hanging in the center of the room. The chandelier is made of at least one of every bone in the body.

There are bones and skulls everywhere you turn. There are garlands of skulls all around the room. There are three more chandeliers. The chapel’s altar has large monstrances (where they keep the bread after it’s blessed, or other holy objects)  made of bones on either side. Rint put his signature made of bones on the wall by the entrance. There are display cases filled with skulls. Some of them have holes or other signs of trauma. The chapel contains the bones of over 40,000 bodies.

There’s some debate about whether or not the Ossuary is haunted. There are people who claim that ghosts have appeared in their pictures. Some say that they’ve seen and heard things. Others have said that they’ve been overcome by strange feelings. The bones of over 40,000 people, the majority of them died from plague or war. Buried, dug up, and glued all over the place. If you believe in ghosts – this sounds like a perfect place to find them.

Haunted or not – The Sedlac Ossuary looks like an amazing place. Probably macabre to some, I imagine. I can see how the thought of being surrounded by all those bones could make people uneasy. I’ve seen reviews that called it everything from horrifying to awe-inspiring. Some have even called it peaceful. Click here to take an amazing virtual tour of the Sedlec Ossuary and the adjoining chapel.

I’m definitely going to add it to my list of must-see creepy places! Who’s coming with me?