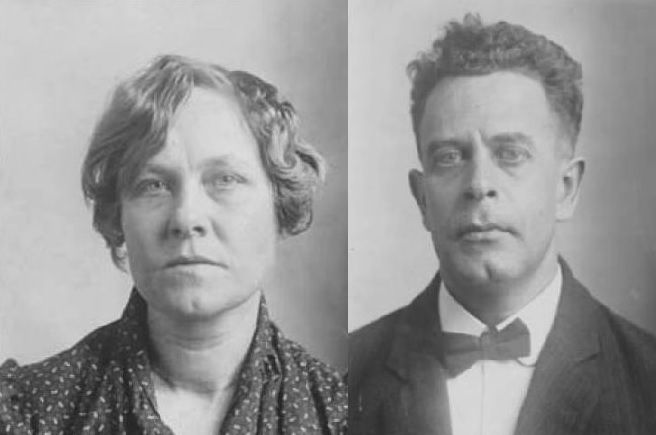 Everyone has said the phrase “I want to kill him/her” at least once. You know it’s true. People don’t mean it, but when you’re angry…the thought just works! Although every once in a while, someone decides to try it. But I’ve never heard of anyone that fucked it up as bad as Ruth Snyder!

Ruth’s family didn’t have a lot of money growing up. She was a sickly child, so most of the money went to medical bills. All she really wanted was to get married and lead a better life. Then she met Albert Snyder. Albert was an art editor for Motor Boating Magazine. Ruth had been working in his office for only four months before they got married. Unfortunately, the marriage was miserable from the start. Albert was still in love with a woman named Jessie Guishard. She was his dead fiance. Jessie died before she and Albert got married and he never got over it. He had a picture of her in the house, talked about her constantly, and named his boat after her. When the Snyders moved from Long Island, NY to Queens Village – Jessie’s picture went up in the new house too.

Ruth and Albert’s daughter Florence was born in 1918. Ruth hoped that having a baby would make them closer, but Albert hadn’t wanted any children. They grew further apart. His devotion to Jessie never changed and Ruth knew the marriage was doomed. Ruth’s mother eventually moved in with them, giving Ruth a built-in babysitter. She knew that she was never going to be able to compete with the ghost of Jessie. So Ruth started looking for affection from someone else. One day, while shopping with her friends, Ruth went into a corset shop. That’s when she met Judd Gray.

Judd was also married with a daughter. Judd’s wife was a quiet, churchgoing homebody.  The problem was that Judd was a mama’s boy. His wife could never be as good as his mother. Judd and Ruth started having an affair. When she learned what a mama’s boy he was, she stepped into the role. Ruth gave him all the love and support he wanted. She even told him that he could call her “Mother”. She also fulfilled the sexual desires that Judd’s wife didn’t. In return, Judd listened patiently while Ruth complained about Albert. They couldn’t get enough of each other and met as often as possible. Their pillow talk slowly turned into Ruth talking about killing Albert. But it didn’t go so well!!

Ruth had Albert take out forty-eight thousand dollars worth of double indemnity life insurance. If his death was accidental, the insurance would pay double. She kept setting up “accidents” that were meant to kill him. They didn’t work. Ruth tried things like sabotaging the car jack, poisoning his food, and she even tried gassing him with carbon dioxide when he was working in the garage. She attempted to kill him seven times. She kept insisting that Judd help her, but he didn’t want to.

Judd finally agreed. On March 20, after getting very drunk, he took the bus from Syracuse to Queens Village. The Snyders were at a party.  Judd, following Ruth’s instructions, snuck in and hid in a spare room closet. After the Snyders got home, Ruth waited for Florence and the drunk Albert to fall asleep. Ruth took Judd into the bedroom. Judd hit Albert on the head with a sash weight (a weight to balance a window sash), stuffed chloroform-covered rags up his nose, and strangled him with a piece of wire. Then they made a mess of the house, he tied up Ruth and left the house. Ruth screamed until Florence woke up and untied her, and Ruth called the police. However, they did a terrible job at making it look like a robbery. Ruth claimed that two big Italian men had broken in. When the police searched the house, they found the “stolen” items hidden in the house. There was no sign of a break-in and the police thought Ruth was much too calm for a woman whose husband was just killed. They found a letter with the initials J.G. They asked Ruth and her answer was “What does Judd Gray have to do with this?” The police got suspicious. Ruth and Judd were both arrested and immediately turned on each other.

Although each blamed the other, they were both convicted and sentenced to death by electric chair. Ruth was executed first at Sing Sing Correctional Facility in NY. Pictures were banned at executions, but Tom Howard, a photographer from the Chicago Tribune, hid a plate camera in his pants leg and took a picture of Ruth during the electrocution.

Here are a few interesting facts relating to the Snyder/Gray murder: