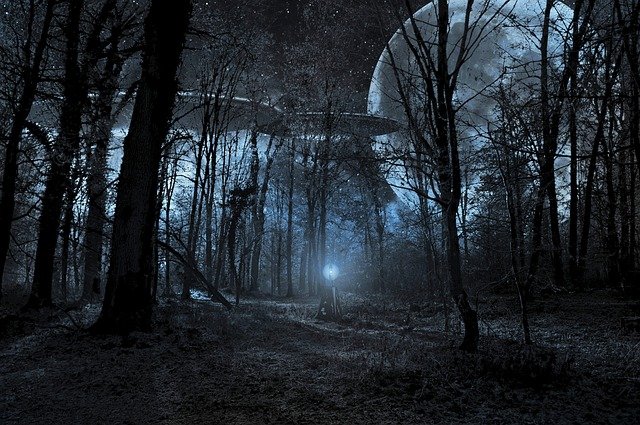 Go to any place in the world and you’re apt to find out that they have little green men. Those little buggers seem to be everywhere! They do drive-bys, hang around and watch, annoy townspeople, and even kidnap. And apparently, they love the butt stuff!  (Maybe we should all carry around some lube – Just in case!) Did you know that the first reported sighting of aliens supposedly happened in 1955 in Hopkinsville-Kelly, Kentucky? Neither did I until recently.

The night of August 21, 1955, started off like any other night on the Sutton family farm. But suddenly, a man named Billy Ray Taylor ran to the Sutton farm. He claimed that he saw a silvery object in the sky. He said it was really bright and its exhaust was all the colors of the rainbow. He said that it silently flew over the house, stopped in mid-air, and then dropped straight to the ground. Of course, the Suttons didn’t believe him.

Later that night, the Suttons’ dog started barking like crazy. The men went to see why and saw a weird glow outside. In the middle of the glow was some kind of creature. They said it was about three feet tall with an oversized head and huge eyes that glowed yellow-ish. Its arms were almost to the ground, and its hands were talons. They said its skin was silver and sort of shimmered like silver metal.

The men tried to shoot it, but it put its hands up, flipped over, and disappeared. They saw another one in the window, but when they tried to shoot it, it did the same thing. Billy Ray Taylor went out on the porch to look around. Someone saw a hand reach down from the roof to grab him and they pulled him inside. They started shooting at the roof, and someone saw another creature in a tree. It floated to the ground and ran away. After a few more hours of hearing noises, they all ran to their cars and drove to the Hopkinsville police station.

The local and state police and military police from nearby Fort Campbell Army Base investigated, but all they found were bullet holes and bullet casings. Unfortunately for the Suttons, the creatures showed up again a few hours later. They spent the rest of the night keeping the creatures away from the house. They were gone by morning. There was no evidence they had ever been there.

Once word spread through the town, people started showing up at the Suttons’ farm. It got so bad that they started charging money for a look around and pictures. The story of the little creatures spread everywhere. Years later, a woman in Kentucky said she saw an alien on her property. Hers was green and about six feet tall. The combination of stories about the little gray creatures and the tall green alien was believed to be the start of the “little green men” mythology”.

In 2009, the town of Kelly, Kentucky was home to the “Little Green Men Days Festival”. It sounds kind of fun! Music, arts and crafts, cosplay, rides, food, etc. Click here to see the festival website. The Hopkinsville legend is also rumored to have inspired movies like E.T. and Close Encounters of the Third Kind.

I guess we’ll never know if this was the actual first alien sighting, or if it even actually happened.   Either way – keep your eyes to the skies and watch your backyards. If you see any UFOs or little green men let us know!