The Hinterkaifeck murders happened in a small town in Bavaria. It was owned by the Gruber family. On March 31, 1922, all six family members were mysteriously murdered. The victims were Andreas and Cazilia Gruber, their daughter Viktoria (she was a widow), Viktoria’s children Cazilia and Josef, and the family’s maid, Maria Baumgartner. It was her first day on the job.. According to police, the killer lived with the bodies for three days and the case has never been solved. According to a former maid, strange things were happening with the family before the murders.

About six months before the murders, the family maid quit. She said that she had heard footsteps and voices in the attic and always felt like she was being watched. She thought the house was haunted. A few weeks before the murders, Andreas found a newspaper from Munich on the property. It didn’t belong to the family or any of the neighbors. Then one of the family’s keys disappeared. A few days before, Andreas told his neighbors that he found tracks in the snow. They led to the farm’s machine shed, and the door lock had been broken. That same night he heard someone walking in the attic. He searched the house but didn’t find anyone. He never went to the police.

On April 1, 1922, Viktoria’s daughter Cazilia didn’t go to school, Viktoria didn’t go to choir, and the family didn’t show up for church. By April 4, no one had even bothered to pick up the mail, and people were very concerned. Several people in town went out to Hinterkaifeck to see if the family was ok. They were not prepared for what they found. Inside the barn were the bodies of Andreas, Cazilia, Viktoria, and her daughter Cazilia. They were killed with a mattock (it looks like a pickaxe with one very wide end) and were buried under hay. They found the bodies of Josef and Maria Baumgartner inside the house.

During the investigation, the police determined that the killer had stayed in the house for at least three days after the murders. They ate the rest of their food and fed the livestock and the dog. The murders were gruesome. Viktoria was struck in the head nine times and her skull was smashed in. Cazilia was hit seven times in the head and strangled. Andreas’ face was smashed in and the bones were coming through his skin. Little Cazilia was beaten in the face and had a shattered jaw. It appeared that she didn’t die instantly, although the others did. She had ripped out clumps of her hair before she died. They had been stacked in the barn and covered in blankets. They found Josef in his bed. His face was bashed in and he was covered with his mother’s dress.  Maria was in her room, covered with a sheet. She had been beaten in the face. 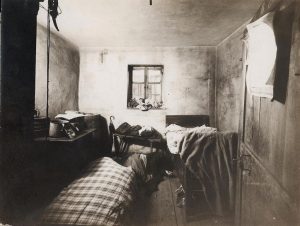 The police determined that whoever had killed them had been living in the house for over six months. Neighbors saw smoke coming from the chimney in the days before the bodies were found. The killer was most likely someone familiar with farm work because they maintained the farm for days. The brutal nature of the murders suggested someone with a grudge against one or more members of the family. They didn’t find any clues that would lead them to the killer. However, they had several suspects:

After the bodies were autopsied, the heads were removed and sent to a medium in Munich, in the hopes of finding clues. There was nothing. Then at some point after that, the heads disappeared. They were never found. The bodies were finally buried but without their heads. In 2007, the Fürstenfeldbruck Police Academy reopened the investigation. However, evidence had become lost and witnesses had died. This made it impossible to solve the murders. The investigators did agree on a theory, but it wasn’t disclosed out of respect to the descendants of their suspect. The murders remain unsolved to this day.