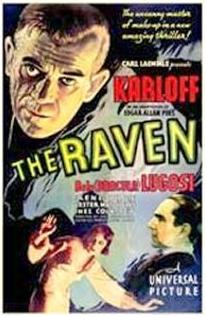 The other night I was looking for something to watch and I came across The Raven with Bela Lugosi and Boris Karloff. What a great movie! This isn’t Edgar Allen Poe’s Raven. It’s completely different. I’m ashamed to admit that I had never seen it before. (Please don’t yell at me).  So I got myself comfortable and hit play. I can’t believe that I’ve missed this one.

Lugosi is hands down the star of this movie. Boris Karloff got top billing, but Lugosi owns this! He obviously had a blast with this role!  Dr. Vollin is a narcissistic sadist and Lugosi plays it perfectly. His facial expressions are fantastic and his accent definitely and the way he over-enunciated words add to the effect. At the beginning of the movie we see him reciting The Raven, seemingly to a stuffed raven on his desk. It’s our first glimpse into his insanity. The more the movie progresses, the crazier he gets. 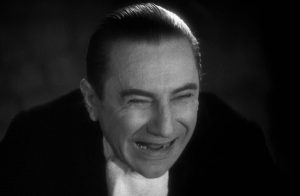 Karloff’s Bateman was compelling. He starts off mean. He shows up at Vollin’s house with a gun. He’s trying to force Vollin into surgically altering his face. He’s on the run and wants to be unrecognizable.  He blames his crimes on his face, telling Vollin “…maybe if a man looks ugly, he does ugly things.”  Vollin responds with “You are saying something profound!”.  That should have been Bateman’s first clue. He convinces Bateman to put the gun away. He takes him downstairs to the operating room he conveniently has in his basement.  Bateman has no idea what’s about to happen. 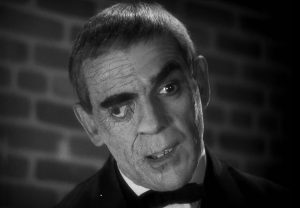 This is where Lugosi starts to have fun with the role! He messes up Bateman’s face instead of fixing it. For those of you that haven’t seen the movie, I’m not going to ruin the scene. It’s one of my favorite parts. Lugosi spends most of it laughing the most maniacal laugh. Dr. Vollin manages to force Bateman to help him carry out a plan he’s thinking of. (More on that later) It’s Karloff’s best scene too, as far as I’m concerned. Bateman realizes that he’s trapped, and Karloff does an excellent job at letting us know exactly how he’s feeling. He takes Bateman from criminal on the run to sympathetic victim in just a few minutes.

A woman named Jean Thatcher was in a car accident and the doctors don’t think they can save her. They say that the only man that might be able to, is a retired surgeon named Richard Volln. So Jean’s father, Judge Thatcher, goes to Dr. Vollin and begs him to help. He says no, but his ego gets the better of him. He operates and saves her. During her recovery Jean and Vollin become friends. He shares his love of everything related to Edgar Allan Poe. He even tells her about the torture devices inspired by Poe’s writing that he built. Vollin is becoming obsessed with her (and she seems to have a crush on him). Jean is a dancer, and as a surprise for Dr. Vollin, invites him to see her dance. She surprises him with a performance accompanied by a man reading The Raven, Vollin’s favorite Poe story. I think this was the moment that Vollin decides that he has to be Jean, no matter what.

At Jean’s performance, Judge Thatcher realizes that Dr. Vollin was in love with Jean. He later confronts Vollin and tells him to stay away from Jean. Vollin is pissed and they have it out. The last thing he said to the judge was “Send her to me”.  Vollin invites the judge, Jean, and her fiance to his house for the weekend. The judge tells Jean and her fiance not to go, but they do anyway.  They leave a note asking the judge to join them.  He does, intent on protecting Jean. The party was just a cover for the scheme that Dr. Vollin had come up with to keep Jean for himself.

He makes Bateman pose as a servant to help him in exchange for fixing his face. Everyone is having a good time until Bateman walks in. Everyone is freaked out by his appearance. Jean screams at first, but changes her tune and apologizes to him. Bateman is so grateful to have someone not treat him as a monster that he starts feeling conflicted. He’s desperate for Vollin to fix his face, but her kindness makes him hesitant to hurt her. Everyone is taken upstairs to their rooms for the night. Judge Thatcher confronts Vollin about his intentions toward Jean, and Vollin asks him to come downstairs and talk. But downstairs is his torture chamber, and with Bateman’s reluctant help, he sets his plans into motion. As always, I don’t want to spoil it for those that haven’t seen it by telling you what happens after.

The movie is gorgeous. The cinematography is wonderful. The close-ups on Lugosi’s face really show his madness. Vollin’s house is a huge gothic mansion, of course. (My favorite) If Saw had been made in 1935, the basement would have been a perfect setting.  Dusty, creepy, and full of fucked up devices. Now that I think about it, Vollin and Jigsaw have a lot in common.  I wonder if James Wan is a fan of The Raven?

My only complaint about the movie is that we never learn why Dr. Vollin is so evil. I spent the whole movie wondering if he was always inherently evil, or if something in his past screwed him up. I would have loved it if there had been flashbacks or something to explain it. Other than that, I thought it was a great psychological thriller.