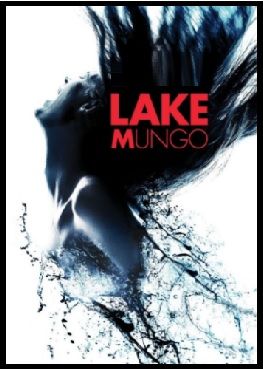 Lake Mungo was an interesting movie. But I’ll be honest – I had a hard time thinking about writing this.  I couldn’t decide how I wanted to classify this movie. It’s a horror/thriller/mystery/ghost story disguised as a documentary.  I have to admit that The Babadook was naturally the first Australian horror that came to mind.  Then my friend Michael, an artist in Australia, suggested Lake Mungo instead.  So I fired up Amazon Prime and watched it!

The plot may sound a little familiar. The movie centers around the Palmer family after their daughter Alice mysteriously drowns in Lake Mungo.  (Definitely a little Twin Peaks-ish). Of course, there are the obvious questions – How? What happened? Why? The family is grieving and trying to come to terms with it. The “documentary” has interviews with the family and with Alice’s friends. But other things are happening that add to the mystery. 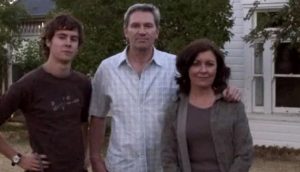 Strange things start happening at the Palmer house. The family starts seeing Alice’s reflection in things. She starts showing up in the background of pictures and videos. Mr. Palmer meets up with her in her bedroom, and Alice is NOT happy that he’s there. Alice’s mom June dreams of Alice sitting on the end of the bed soaking wet.  The family turns to a radio psychic named Ray Kenney to find out if Alice really is there. And why. Ray spends a large amount of time with the Palmers. He claimed that the case moved him so much that he wanted to help.

Alice’s mom finds her diary and (plot twist) learns that Ray knew Alice. Alice had been having strange dreams. She dreamt about drowning. She felt like she was being haunted by her upcoming death. She didn’t feel that her parents ever understood her.  She didn’t think that she had anyone to talk to, so she called into Ray’s show. They spoke several times. He knew everything about them before Alice’s mom called. But he didn’t tell them. 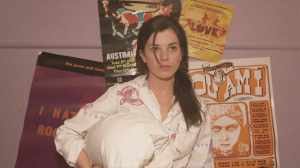 Reading Alice’s diary clues the family into things that had been going on with Alice. They also find her cell phone. It shows – among other things – videos of Alice during a camping trip at Lake Mungo. In one video she is burying something. Between the diary and phone, the family learns a lot about her. They have video cameras set up in the house in the hopes of catching Alice’s ghost. The camera footage also leads them to some shocking info.

The Palmers start to wonder if they ever truly knew their daughter at all. Was she haunting them? Was she leading them to clues so that they WOULD know her better?  Was she even dead at all? These questions are constant throughout the movie. Lake Mungo isn’t your typical “found footage” movie.  I was honestly expecting a Paranormal Activity type of movie. But writer/director Joel Anderson went in a different direction. He relied on the atmosphere. The movie is sort of dark and quiet. He intended to creep us out, not make us jump.

Lake Mungo is full of sadness and dread. When you lose someone you love from unexplained circumstances, you want answers. The more the Palmers learn about Alice, the harder they look for those answers. Their search eventually takes them to Lake Mungo.  The movie has been called one of Australia’s scariest movies. If you combine the terror of losing a child with fear of never knowing (or knowing the truth) about what happened, I can understand that.  Then add on the feeling of being haunted by your child’s ghost. It’s the kind of movie that makes you think about it for a while.  Make sure you see it with someone so that you can talk about it afterward.