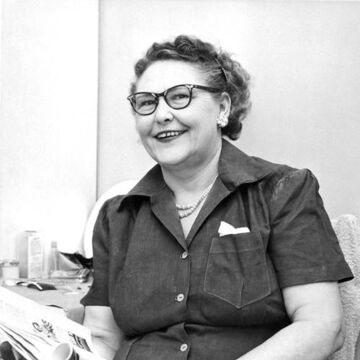 Grandmothers are the best! They knit, bake, and put weird amounts of money in birthday cards. They love to spoil their grandkids. And Nannie Doss was no exception. She was always smiling and laughing. Rumor had it that Nannie could whip up the most delicious cakes you could imagine. She was smart, sweet, funny, and caring. All of that aside, one of her most well-known skills was murder. 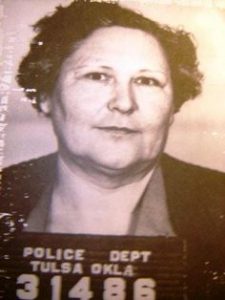 Nannie (her real name was Nancy Hazle) grew up poor on a farm in Alabama. When she was seven, a train she was riding on stopped short, and she smashed her head on a metal bar in front of her. She grew up suffering from depression, headaches, and blackouts because of the injury. During her early teen years, she spent a lot of time reading romance stories and “lonely hearts columns”.

Nannie’s father was very mean and controlling. He kept his children home to work the farm instead of sending them to school. He wouldn’t let Nannie and her sisters wear makeup or nice clothes. He believed it would keep the girls from getting molested. They weren’t allowed to go to dances or any other social activity. When she was sixteen she met Charley Braggs. Her father gave them permission to get married four months later.

If Nannie was hoping for a better life after marriage – she was very wrong. Bragg’s controlling mother lived with them. She ran the house and watched over Nannie like a hawk. Nannie and Charley had four daughters. Then Nannie started drinking and both she and Charley had affairs. In 1927, two of their daughters died from what they suspected was food poisoning. Charley took their oldest daughter, Melvina, and left Nannie. Then Charley’s mother died. Nannie went to work in a cotton mill. Charley and Melvina came back (along with Charley’s new girlfriend). He and Nannie divorced and she moved in with her mother, taking her daughters with her.

In 1927, Nannie married Robert Harrelson, who she met through a lonely hearts ad. Despite his being an alcoholic, they were married for sixteen years. During that time, her daughter Melvina got married and had two kids. The second died soon after it was born. Melvina said that she thought she saw Nannie stick a pin in her daughter’s head while at the hospital. Although Nannie had been seen with a pin, no one saw her do anything. Grief from the death drove Melvina and her husband apart.

After the divorce, Melvia started dating a soldier that Nannie didn’t like. In 1945, Melvina went to visit her father after a fight with Nannie and left her son Robert with Nannie. While Melvina was away, Robert died. The cause of death was “asphyxia from unknown causes”. Nannie had taken out a life insurance policy on Robert and got paid five hundred dollars. That same year, Nannie’s husband Robert came home very drunk one night and raped her. The next day she put rat poison in a jar of whisky that Robert had hidden. He died that day.

Thanks to the lonely hearts column, Nannie met Artie Lanning and married him two days later. Two weeks later, Artie died of a supposed heart attack caused by the flu. After Artie died, Nannie moved in with his mother. Arlie had left their house to his sister, but it conveniently burned down. Nannie collected the insurance money. Then she decided to move to North Carolina and live with her sister Dovie because Dovie was dying from cancer. Right before Nannie left – her mother-in-law died in her sleep. Then Dovie died shortly after Nannie moved in.

Soon Nannie met Richard Morton through the Diamond Circle Club dating service. and got married for the fourth time. Unfortunately, Richard cheated on her more than once. After they got married, Nannie’s mother moved in with them. She broke her hip and needed to be taken care of. In January of 1953, Nannie poisoned her mother. Three months later she poisoned Richard.

Apparently, Nannie wasn’t done yet. She married a minister named Samuel Doss. Samuel told her that he didn’t approve of her reading romance novels. He said she could only watch or read educational things. Soon after, he ended up in the hospital with terrible flu symptoms that progressed to a digestive tract infection. He was released on October 5, 1954, and died on October 12th. Nannie waited for a payout on two life insurance policies.

Dr. Hidy, Samuel’s doctor, got suspicious. He asked Nannie for permission to perform an autopsy. Nannie agreed, even though Dr. Hidy told her that anything suspicious could result in a murder charge. The autopsy showed a large amount of arsenic in his stomach. He told the police and Nannie was arrested. With a big smile on her face, Nannie confessed to the murder because “…he got on my nerves”.

In court, Nannie pled guilty and was sentenced to life in prison. When the families of her first three husbands heard about the arrest, they had investigations opened. They all had arsenic in their stomachs. Nannie is suspected of killing three husbands, her mother, mother-in-law, sister, two children, and two grandchildren. Samuel Doss was the only murder she was charged with. 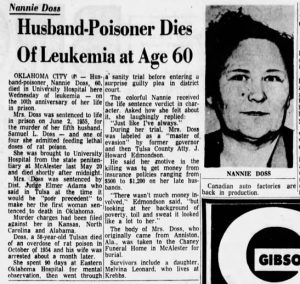 Nannie seemed to enjoy the spotlight. She was still the smiling, laughing woman that people knew before her arrest. Life magazine bought her story. She joked about killing her husbands and laughed whenever she told the story. She even joked about offering to help in the prison kitchen, but that they would never let her. Because of Nannie Doss, any person that dies without a doctor present has to be autopsied to confirm the cause of death.