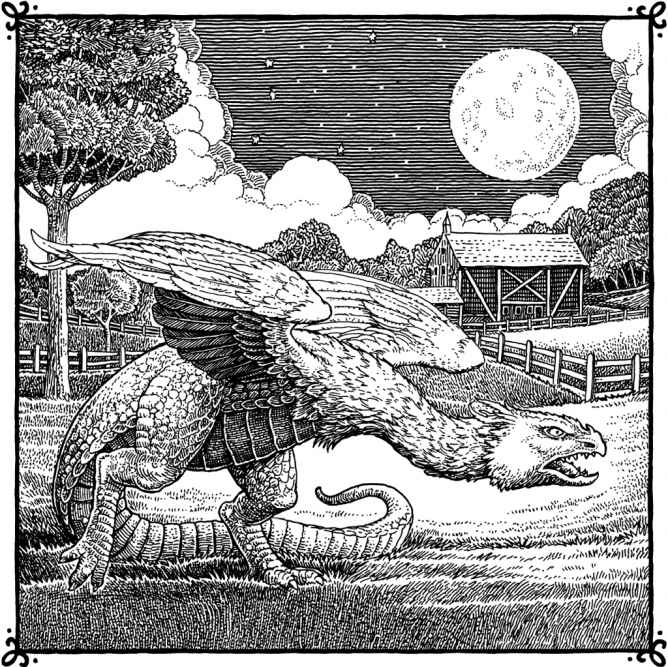 Every night, the people of Frederick County, Maryland make sure their kids are in the house and their livestock is safely in the barn. They don’t want them to become dinner for the terrible Snallygaster! 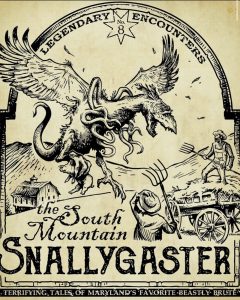 The legend of the Snallygaster dates back to the Germans that settled there in the 1700s.  They called it the Schnelle Geist (it means “quick ghost”). They say that it lives in the caves of South Mountain. It’s half-reptile, half-bird, and flies like a dragon. It has a metallic beak and razor-sharp teeth.  Some people said it also had tentacles. Over time its appearance changed. People said that it had steel hook claws and one eye in the center of its forehead. It also “screamed like a locomotive”.

Sightings of the Snallygaster continued into the 1900s. Locals added hex stars to their barns to ward off the snallygaster. The sightings stopped for a while, but then started again around the same time as Prohibition. There is a theory that the sightings were just stories told by moonshiners to explain any noises from their stills.

There was so much publicity that President Teddy Roosevelt once considered postponing a trip to go hunting for it. The Smithsonian Institution even offered a reward for its capture. There was even a report of the Snallygaster grabbing a man and drinking his blood.

The legend spread, and so did the sightings. A man in Ohio wrote to the newspaper and told them he saw a winged creature flying in the area. It had horns all over its head, huge wings, and made loud screeching sounds. Snallygaster footprints were found in the snow in New Jersey.  A woman in West Virginia claimed it almost got her, and a man in the area said one laid an egg the size of a barrel in his barn. 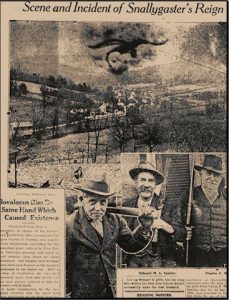 There were several more sightings in Maryland. It supposedly laid an egg in the mountains between the towns of Birittsville and Gapland. A man who owned a brick-burning company said it was sleeping near the kiln.   When it woke up and saw the man it screamed and flew away. Three men in Frederick County claimed to have fought one and chased it into the woods in a neighboring county. 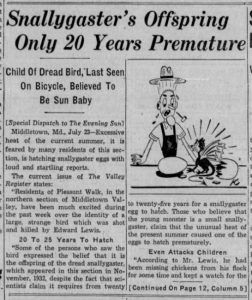 But here’s the thing – it was all a lie! George C. Rhoderick, the editor of The Middletown Valley Register, and reporter Ralph S. Wolf made up the stories. They tried to capitalize on the legend in order to boost readership. They combined the legend of the Snallygaster and the Jersey Devil.  There were no sightings reported for almost twenty years until a man claimed to see one flying over Fredericks County.

The Snallygaster is said to live for around twenty years.  It supposedly died in Washington County, MD. It was overcome by moonshine fumes and fell into a two thousand five hundred gallon vat of alcohol and drowned (Not the worst way to die!). The vat and the Sanllygaster’s body were supposedly destroyed by Federal Prohibition Officers.

It surfaced again in 1948 when it was seen flying over Westminster, Maryland.  It was described as a cross between a snallygaster and a dwayyo. A dwayyo is another Maryland legend (and future Scary Matter article!). It looks like a wolf but walks like a human. The dwayyo is supposed to be a snallygaster’’s mortal enemy. There haven’t been any sightings reported since.

The next time you’re in Maryland, you might want to head to the town of Libertyville and visit The Snallygaster Museum.